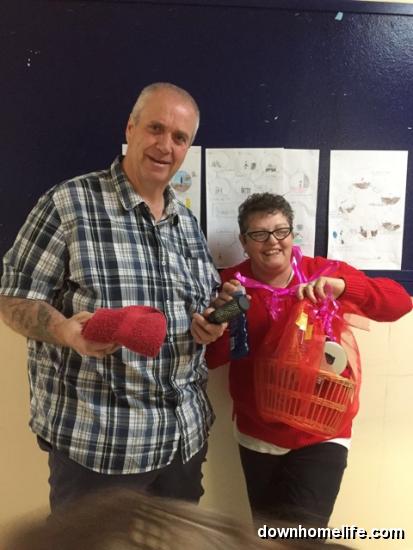 A few years ago, our fire department was selling tickets on a basket of towels and bathroom items as a fundraiser for our community. I took some tickets to the school where I worked to sell.

Every day he would ask me if they had drawn for the basket yet. I kept telling him "soon, soon."

At bingo one night they drew the tickets. He didn't win. A little girl in the community won it. When bingo was over I went to the man that drew the ticket and asked him what he was doing with the old tickets and he told me they were going in the garbage. I asked him if I could have them. He looked at me a little strange and asked what I wanted them for. I said "I want to play a prank on someone."

I came home with the old tickets and picked through them and found the driver's name and the principal's. I made up my own basket with pretty paper and a big pink bow. I rounded up some crusty hand towels, a brush with hair on it, a cracked mirror, and half a bottle of Dippy Dew. Already the basket looked really pretty. I took the ticket with the driver's name on it and taped it to the outside.

Next morning, off I went to work and met him in the hallway. I sang out "look what you won!" He said he didn't believe me. I said, "look, it's got your name and the principal's on it, ha!" He kept saying, "no b'y I don't believe you." I finally convinced him that he had won it, and the kids gathered around and asked him to open it. When he opened it and took out the used towels, brush with hair and cracked mirror, I can't repeat what his words were. He told everyone no to buy any more tickets off me. I was dying laughing.

Well, the next morning I came to school and brought him a chocolate cake to make up for my prank. He said "no way, I don't trust you!" He actually thought I had put something in the cake. I finally convinced him to take it, saying it was a treat for him and his wife to take camping. At the end of the day, the cake was left at the school. I took it out to the bus and told him that I swear that there wasn't anything in the cake. He said "thanks, but you take the cake for your grandson because the wife and I don't like chocolate cake."

So off I go to my truck, and wouldn't ya know, there was a big orange sign stuck to the back with 'Just Married' on it and a used toilet brush hanging off my hitch!

I got in and went home, picked up my husband and my grandson and went to Howley with the sign and the toilet brush on the truck. What a lot of 'Beep! Beep!' on the way, everyone thought we had just got married!

Too funny not to share. Every time I tell this story I have to chuckle.

Ps. He will never trust me again. And he'll never buy another ticket off me.