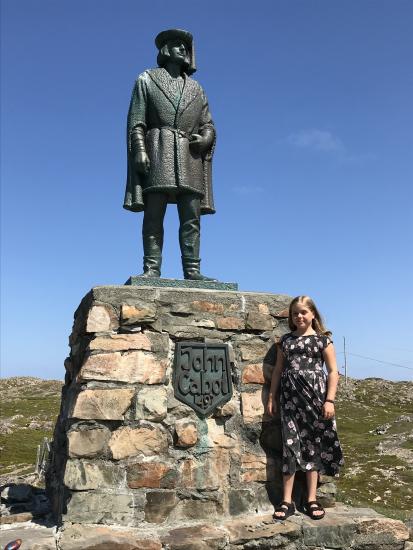 A year ago my family and four of our family friends (Eddie, Jenifer, Carter and Creston) went on weekend getaway to Trinity Bay, NL, We left from our home town Baie Verte, NL. On our way to Trinity Bay we made a few pit stops and stayed the night in Gander as it was getting to be late and everyone was tired.

Early the next morning we were on the road again with the intentions of going to a dinner theatre. We made a snack stop to get a few snacks for the ride but it wasn't too far from Gander to Trinity Bay. After we had reached our destination Trinity Bay we first went for lunch and had some delicious squid rings, onion rings, crab au gratin and Newfie poutine which is just poutine with bologna at the "Rugged Rock" restaurant. Once we had finished our lunch we set off, seen a statue of John Cabot and a miniature replica of the "Mathew."

A few hours later after checking in to our hotel (which was very nice and had lots of Newfoundland Antiques) we set off to find the "Rising Tides Theatre," where the dinner theatre would be. After we found the dinner theatre we checked in and got our food there were lots of options. The dinner theatre was great, the performers did a wonderful job and they're acts were so funny...the best act was when they acted out a Newfoundland song called "Piece of Baloney!"

The next day we went to a John Cabot History Museum and read lots of facts all about the "Mathew," its voyage and we even saw a life size replica of it! After that we packed up and set off for Baie Verte. It was a four hour drive but I had plenty of company!

It's definitely worthwhile to go to Trinity Bay even if it's just a weekend getaway! Even though Covid-19 restrictions say we cannot go on any vacations abroad who says we can't have a staycation and visit somewhere in our province with many beautiful sights!

(the photo is me with the John Cabot statue)