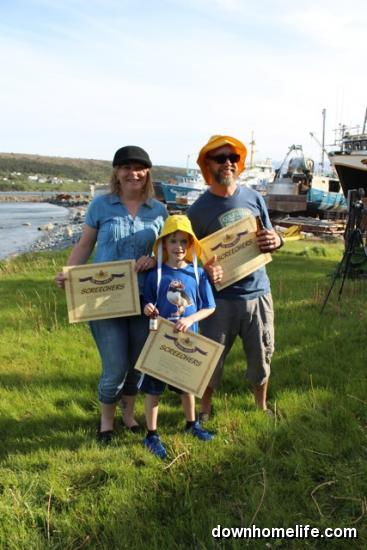 By the Lard Thundering Lifton - This was my Fathers most common swear words.

Well my Daughter Tonya married a young gentleman by the name of Kirk Lifton.

My comment when I first met this young man was "by the Lard suffering" - yes he used that word to Lifton. I wouldn't forget your last name b'y.

This past summer, Kirk, Tonya and my grandson Davis (9 years old - his first name is my last name) all vacationed in Newfoundland. This was Kirk and Davis's first time in our beautiful province. We had a lovely time traveling all around the island especially Conception Bay. The attached picture was taken while visiting my sister May Garland's home in Harbour Grace. My nephew Don Coombs, who happens to be the town mayor, joined us in May's back yard. A lovely setting overlooking the beautiful Harbour. Don conducted a Screech-In ceremony to first time visitors Kirk and Davis. Of course, Davis had to settle for Coke. Don did a splendid job using his best Newfie dialect. He also made Davis Mayor for the next hour. He placed his official collar and Davis, sporting his Mayor's Banner didn't know what to expect - he keep staring at all the paraphernalia, the certificate, a raw potato, and of course the dead codfish, however during the ceremony he followed Don's instructions to the T.

This was one of the many highlights of our trip along with a whale watching boat trip to see the puffins, meeting some mummers and of course a visit to the Downhome Shoppe in St. John's. All in all we had a very interesting, informative and enjoyable vacation. On a personal note I spent thirty five plus years in the RCAF, I was born in a quaint little settlement of Bristol's Hope, now living in North Bay, ON. I have kids spread out all over our great country and the USA and I make sure they all visit Newfoundland as often as possible.