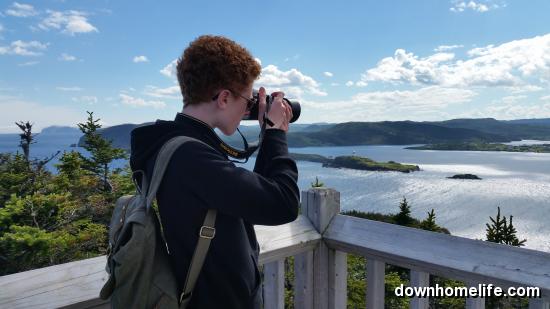 Caught between a Rock

Prologue: My Grandfather Austin Cooper is from Irelands Eye. We went on our first vacation to Newfoundland and Labrador in 2013 to see where he lived and grew up.<br />
<br />
When I was in grade 10 I was inspired to write the following essay for my class and I feet It should be shared.<br />
<br />
I woke from my slumber. The rumbling of the plane as its' landing gear ever so slightly touches the runway. The rumbling began to soften as the plane came to a halt. Myself as well as many other passengers sighed in relief as most do once a plane lands.<br />
Unlike most terminals, this airport had us get off the plane directly onto the runway. As soon as I stepped through those doors, a gust of wind hit me. It felt good. Not just because of the fact that I've been on a plane for five hours but the fact that I was in a place I had reason to be in. This is a place where history was made in every small town and dock. This is Newfoundland and Labrador.<br />
I've been to Newfoundland twice now, and I have learned that you don't have to go very far to find something that may very well stay with you for a lifetime. It didn't matter where you would go, there would always be someone there to lend a hand and aid you in your troubles or whatever you may face. Newfoundland and Labrador is a place where you can forget about life's troubles and live in the moment.<br />
At some points in my trip I just had to stop and take it all in, and in those moments you begin to realize how important little moments like just standing, facing a side of you that you never knew was there.<br />
I have to be honest, when I found out about this trip I was kind of sceptic of it. I was about to come to a conclusion of how boring this trip was going to be until I saw the province itself.<br />
I remember a hike I took. The sun was setting over the horizon as I came up to the edge of a cliff overlooking the ocean. The shimmer of the pristine water as the warm glow of the sun bounced off of it. I took a deep breath. Although this breath was different, it was being held exceptionally long. Almost as if I had forgotten to breathe.<br />
It was silent for a few seconds. Tranquillity was obvious now, time appears to slow with each passing second. At this very moment, I knew nothing of the past nor the future, I was in the moment. A sound broke the silence. Waves began crashing against the side of the cliff.<br />
I then suddenly heard a voice come out of a seemingly unpopulated world. At first, the words were just a blur, almost imperceptible against the wind and the light rain that began to fall. I began to focus on these words and where they were coming from but strangely, it was much harder than I recalled to listen to someone speaking. It almost seemed to be a wall between myself and everything around me.<br />
I finally broke through. The words were as clean as can be. They seemed to strike me as something greater than even the sights and sounds. I was comprehending prior to the encounter. At last, I heard-&quot;Are you okay?&quot;<br />
The voice echoed for what seemed to be an eternity. I refused to look back for some reason, a reason unexplainable.<br />
&quot;Did you hear me?&quot;<br />
I fought every muscle, every fibre in my body to answer. What was so difficult about a &quot;yes&quot; or &quot;no&quot; baffles me to this day but at last, one word came out-<br />
&quot;Yeah&quot;<br />
&quot;And?&quot; The voice answered with a bothersome tone.<br />
&quot;I'm fine&quot;. I could feel the annoyance grow in my own voice. <br />
&quot;Okay, I'll meet you back in the car.&quot;<br />
I didn't answer. I was baffled by the sights and sounds of this place. In this instance, I was caught between a rock and nothing else.<br />
<br />
Reflection: This trip changed me in a way that is irreversible. Due to my attitude towards this trip prior to me going on it, I had plenty of room to be proven wrong. The main reason I wrote this was because of my family's history in Newfoundland and Labrador. Before I went on this trip I had no idea of how much family and how many relatives I had in this place. There is no other possible way I couldn't have chosen this topic.<br />
<br />
Liam Friesen<br />
<br />