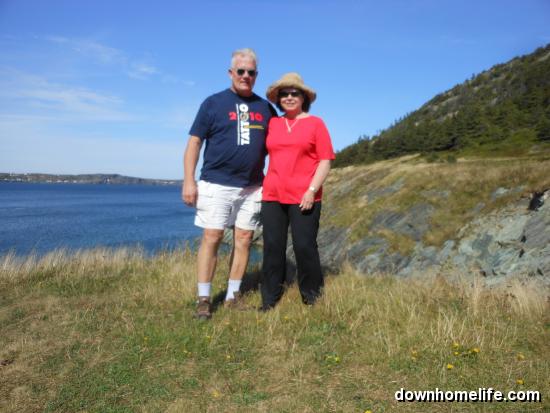 Newcomers to the Rock

I grew up near the Great Lakes, usually within a least a few hours of the Canadian border. Making a few visits as a youngster to Niagara Falls, I was mystified with the different money, the queen on the coins and stamps, and how everything was delightfully different after crossing north from the United States.
Years later, my wife and I relocated to Rochester, N.Y., finding ourselves within 90 minutes of Canada's doorstep. Our visits to Canada increased, along with our curiosity of the country. Avid readers, my wife began to learn more of Canada through its literature, buzzing through history books by Pierre Berton "and in quick order" Wayne Johnston and Michael Crummey. Newfoundland became a "must to visit"after reading about Joey Smallwood in Johnston's Colony of Unrequited Dreams. My wife and I had vacationed in Canada several times, renting cottages in Ontario. In 2016, we decided to go all the way, and booked tickets for a flight to St. John's and 10 days of something completely new.
We were excited to climb Signal Hill in the fog, and go up the staircase to Marconi's perch where he sent sparks heard on the other side of the ocean. We trekked all over the southern part of the island on that visit, returning every night to St. Johns, and soaking up the music on George Street haunts. Like a zillion before us, we kissed a frozen cod on the lips, and were "screeched in." Highlights of the first trip included visits to Heart's Content, Carbonear, Placentia, and Conception Bay. Around St. John's, we took in Quidi-Vidi, and hiked the steep terrain around The Narrows. Wonderful stuff.
The single thing that stood out to us, more than any sight we visited, was the welcoming spirit of the people. When anyone learned we were from the U.S., two questions followed: "Why did you come to Newfoundland, and Who are you voting for in your crazy election down there." (Trump and Clinton had been nominated for president at that time, but elections were still a few months away.) Just about any chat with a Newfoundlander lasted a minimum of 30 minutes, and most of them at least an hour.
We returned again 2017, keeping ourselves in St. John's, eating some form of cod every day for lunch or supper or both; and resolved to spend the time enjoying the food, people and music around town. Our single regret ordering fisherman's brewis one day for lunch. Suffice it to say - it wasn't love at first bite.
This year, we're off to Halifax. We've wanted to see where the great explosion happened in 1917, and see the Royal Nova Scotia International Tattoo in June. We'll be back to Newfoundland, though, the following year.
The Rock what a beautiful place to live, a wonderful place to visit, nothing like it in the world. You even have your own special, one-of-a-kind magazine, Downhome. I found it at the St. John's airport, on the way back home this year. We're glad we subscribed, and look forward to the next issue every month.
We look forward to seeing all of you again, many times in the future.
P.S. Have attached some photos of our visits in case you want to use one or two.

I found your experience to Newfoundland most intriguing. I was born and raised there but left in 1964, right out of high school and moved Ontario where I live to this day. I came from Laurenceton, a small town near Lewisporte. Drive there for a little side trip your next time down – beautiful little town. Trust you were able to visit towns like Port-de-Grave, an amazing fishing village. I also like the Downhome Magazine. I subscribe to it. You can see some of my writings and pictures in the November & December issues. Yes, Newfoundland is a beautiful place and I still love to visit there occasionally. For me there is no place like home. Continue to enjoy your future visits there – “Long may your Big Jib draw” Calvin Perry