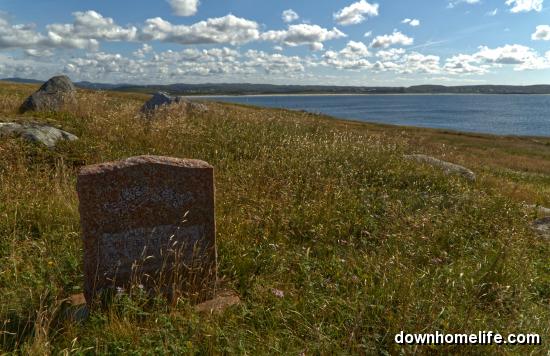 O'er the Hill and Through the Woods

Over the years, I've grown to enjoy Grand Bay West in Newfoundland. After the long night sleeping on the floor on the ferry from Sydney, Nova Scotia, I'd go for a run from the tourist office on the Trans-Canadian Highway in Port aux Basques down the hill, then up the hill by Foodland, down to First Grand Bay West Beach and up Grand Bay West Road back to the tourist office, about 3 miles. Sometimes, I'd end up walking or going for a run on the nice boardwalk trail by that beach at the end of Kyle Lane. Last year I hiked to the end of the much longer Second Grand Bay West Beach on the other side of the trail because I wanted to check out the lone cabin on the hill, which I could see in the distance.

This year, at First Grand Bay West Beach, I talked to a woman, who told me there was a trail after that lone cabin with three more cabins at the end of it at a beautiful isolated beach. So, I took off slow running on the boardwalk, then eventually slowed down to a hike on the thick sand to Second Grand Bay West Beach, which was just beyond a beautiful solitary farm. The long ferry trip from Sydney had sucked out my energy. Well, not all of it. Ever since my first visit to Newfoundland in the 1990s, I'd been fascinated by the tuckamore. At the end of the first stretch of the boardwalk, some of that beauty stood. I took photos of it. Around the corner, the lone farm itself was quite interesting. Then upon the long Second Grand Bay West Beach, I walked and walked until finally it ended. Then I followed the wet marshland ATV tracks up the hill. My feet, of course, got soaked.

At the cabin, I walked around taking photos and admiring the vastness of the scenery. The woman I'd talked to had mentioned that the pathway began by the lone tombstone on the hill next to the cabin. She'd told me the latter had been rescued some time ago from the cemetery, which had been overtaken by the sea. Strange, I thought. So, I found the trail and on I trudged. It was very pretty and very solitary with just me and mother nature. It was a bit woodsy at first. Then eventually, it opened up and I came to a long old broken farm fence, which extended over a hill and across the plain. Once upon a time there were grazing farm animals there.

Finally, I arrived at the solitary shore, which was very rubbly with rocks and so much wooden jetsam. I hunted for the cabins, but didn't see any. Down the shore I hiked, then saw what could be a cabin in the distance, though it was more likely a glacial erratic. On my iPhone, I couldn't see anything that appeared to be a cabin. Beat, I decided to head back; out of the wilderness. And so I walked and walked and walked. Eventually, I was on the pathway heading to the farm house, where so many glittering mica rocks. Now, how did I miss them before? Must have been a question of where the sun had been. Fully fatigued, I couldn't resist collecting a bunch of those mica sparklers. My trek was about 6.6 miles and took me about 3.5hrs, according to my AllTrails app.

Weeks later, I'd check Google Earth and bingo. The three cabins were clearly there, though one of them looked like it was flattened! They were on the other side at a different beach. Well, I always liked trails that had something interesting at the end of them, especially old cabins or stages or even a resettled outport like Little Paradise or Little Brehat. So, a year later, I headed out again on that trail in Grand Bay West. Twas a nice, wondrous mellow sea breeze and the sound of the waves crashing o'er and again. Alone I traipsed, my hips tight my whole body tight from the night's bad sleep on the floor in the ferry. Down the vast stretch of beach, nobody but me. The sand sparkled of mica. Then up the hill on the mushy ATV trail, my feet got muddy and wet. I approached the lone cabin. Then up to the lone gravestone I walked. "In memory of the settlers of rocky Barachois." Hmm, so it probably wasn't a gravestone. No mention of a person. I gazed out at the vast distance I'd still have to walk around the great inlet.

On the way, there were lots of red partridge berries and even a few blueberries, which I picked and ate. And so onwards down I followed the old ATV tracks, maneuvering carefully over and around the puddles. I used Google earth, which pointed to where I was and that really did work great. Finally I saw the top of a white cabin in the distance. Glory be! I'd done it! And so, I approached the three solitary cabins. The one in the middle had a window wide open, no stairs to the front door and a side window open. It looked abandoned. I walked around. Nobody was present. Many cabbages were growing, though looked withering like they too had been abandoned. Amazingly, in the distance, I could see Cape Ray lighthouse and Cheeseman provincial park. Well, time to head back. I grabbed a cabbage and put it in my backpack. The trek this time was 5.8 miles and almost four hours. A day later, I decided to eat a cabbage leaf. So I grabbed the bag I'd put it in, opened it and was greeted by slugs worming around. Yikes!