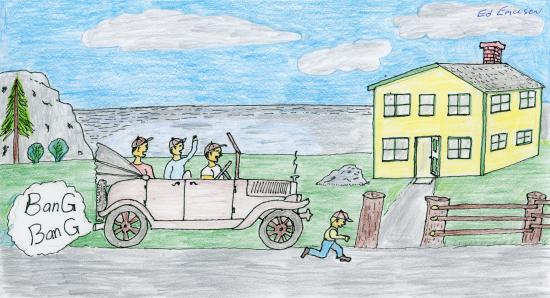 The Ride That Wasn't

Frank Howard was a young man
Who grew up in the little cove
He was five or six years older than me
Maybe even older than that
He had a bicycle, the only one I knew in the cove.

Frank would ride me around the cove
On his bicycle almost every day
I would sit sideways on the crossbar
He would race by the schoolhouse
Try to make Thomas Hill without stopping.

The short stretch of road between the top of the hill
And Uncle Mike Kelly's gate was full of potholes
It was rough going sitting on the crossbar
But it was fun and we laughed all the way to
Alice May's little shop over all those bumps.

Years later Frank got his first car
It was really old, the 'Tin Lizzie' he called it
I was told, many years later in life, that it was
A Model A Ford. It had narrow tires not
Much bigger than the ones on his bike.

I don't know if he had a drivers license
Or not, there weren't many cars around
And policemen were nowhere to be seen
He and some of the Kelly boys his age
Would go down to Grates Cove in the evening.

I really missed riding his bike
One day he said that he would give
Me and ride in his car if I wanted to
I couldn't wait for the time to come
Frank said he would stop by that evening.

Just after supper he drove over the lane
Down from Nan's house and blew the horn
The horn sounded very funny in the quiet evening
I ran down the narrow path from Nan's house
Some of the Kelly boys were in the car with Frank.

I was so excited to get a ride in the car
But just as I put my hand on the door handle
Of the back passenger door, the car backfired
There was this frighteningly loud band which was
Made worse by the echo in the cove.

Well I was scared, but not stiff, cause
I ran back up the hill in a flash
Don't think my little feet touched the ground
Faster than a bullet, in Nan's front door, up the
Stairs and under the bed next to the pee pot.

Think I was shaking like a leaf
Nan didn't know what was going on
Of course I was in no shape to tell her
Frank and the boys in the car were laughing
For days after that, I guess it did look funny.

I never did get a ride in the car
Frank offered many times but there was
No way I was going anywhere near that car
I did play in it a few times years later
When it was rusting away in Ronald's back yard.