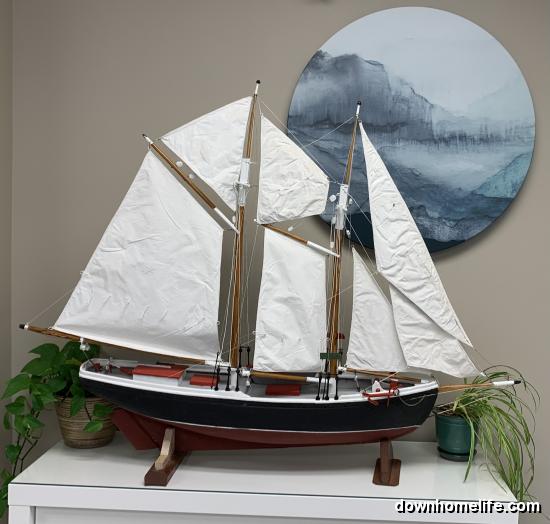 This model is a replica of a Labrador schooner, a common fishing vessel in Newfoundland and Labrador in the late 19th until the mid 20th centuries. Known as "floaters" these vessels travelled North every summer to fish off the Labrador coast. At the height of the fishery, up to 500 boats would sail north every season to fish the Labrador.

The work was hard. The men on these vessels would live aboard ship for several months, fishing offside from small skiffs. The fish was cleaned and salted on deck before being stored in the hold below. The weather could be fierce as ice floes and bergs were present even in summer. Men from coastal and island communities around Newfoundland made this yearly trip to feed their families through the winter.

The artist, Moses Collins, would have been very familiar with this type of vessel living on Indian Islands, a small island community off the coast of Fogo Island. His grandson, Don Downer recounted a childhood memory about seeing a large group of Labrador Schooners in full sail filling the horizon on their way to start the fishing season in Labrador.

Moses' brother, Al Collins, owned a Labrador schooner called the ACME. Likely this model is based on that ship. Moses' art career was cut short unfortunately when he died from the Spanish influenza pandemic in 1918, at the age of 38.

Like most centenarians, this ship has seen a lot in 107 years. Moving through several generations of family members over time and across great distances. It sits now in a place of honor in the front entranceway of Back to Health Chiropractic and Wellness Clinic in Lower Sackville, Nova Scotia.

Although Moses' creation long outlived him, his descendants are still caring for the piece of history he left behind. It reminds us of our shared maritime history and tenacity. Look at how far we have progressed over the last century. Although current headlines would tell you otherwise, life is much easier now than it was during the last pandemic. If he were alive today, I'm sure Moses would agree, we have a lot to be grateful for.