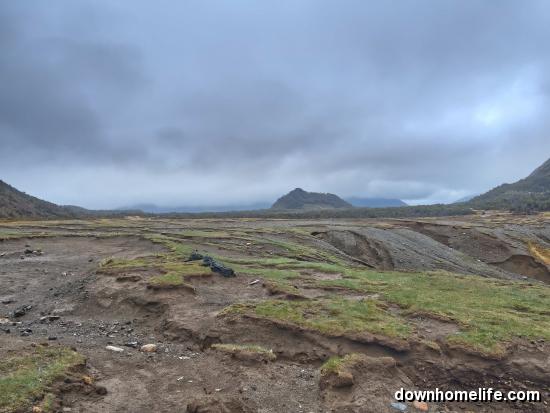 In the Fog of Wilderness

When in Corner Brook, I enjoyed staying a few nights at the Grenfell Campus. There I'd go for a run at the Margaret Bowater park or if not good weather, at the Community Center indoor track just around the corner. And so, I walked down the long hallway to the accommodations building and filled up a cup of coffee, then headed out in the car and aimed for Frenchman's Cove. Several years before, I'd found a nice killer whale tooth on the beach there. Unfortunately, U.S. Customs grabbed it on my way back.

Not in a rush, I took the scenic coastal road, stopped here and there to explore and take a few photos. At Frenchman's Cove, I walked around a bit. Then, what the heck, I decided to continue onwards to the end of the road at Little Port. Once there, I parked and began following the trail through the woods all the way to Cedar Cove - about 2 km. It was quite an isolated and picturesque cove. Just a few houses were there. I walked around a bit, taking photos, then headed back, but noticed a sign for an offshoot trail to the lighthouse, where I'd never been, "1.8 km - Easy to Moderate."

And so, I hiked slowly upwards and upwards and soon regretted it because it got steeper and steeper and upwards and upwards. I wasn't at all prepared. I grabbed the ropes that were there and climbed and climbed and climbed. Everything was damp, so somewhat slippery. Each step I took had to be carefully calculated. Then the worst arrived: a six-foot high boulder blocked the trail. I stopped and turned around. But I'd already gone too far. It would be a nightmare to climb back down on the slippery rocky trail. So, I examined the massive boulder. Thick, dense woods surrounded everything. I grabbed the rope and slowly climbed up on to the boulder, looking for little ridges to place my feet. Without the rope, I couldn't possibly have done it. Whew.

Then again, upwards and upwards and upwards I hiked grabbing ropes, one after the next. Finally, it seemed like I was on top - but I wasn't. So, I continued upwards and upwards, breathing heavily. It was very steep! Then I arrived on the top of the mountain. There, I heard my brother's voice. Was I nuts? Ah, he was on the iPhone in my pocket. I pulled it out and said, hi. He told me I'd called him three times! Now, how the heck did that happen? We talked for quite a while, as I continued traipsing on the rocky, muddy narrow trail. He was in Georgia. It got foggier and foggier - to the point where I lost the trail. I said good-bye.

So, there I was in dense fog, almost in panic mode. It was very windy on top of the mountain. Then by miracle, I found the trail again. Whew! Finally, it began heading downwards and got steeper and steeper. Again, I found myself grabbing ropes, one after the next. Then I slipped on my arse. Then again slipped on my arse. Blood was dripping out of my left thumb. But nothing was broken. Onwards and onwards into eternity I traipsed. The boulders were increasingly slippery. The mud was slippery. I was a muddy mess. Eventually, to my utmost delight, I spotted the lighthouse down below through the woods. But there was still a lot of steep downhill climbing to go and another couple of slips. Suddenly, I was sitting in the mud, resting a bit after another slip.

Finally, I arrived at the lighthouse, which was but an unaesthetic modern-day electronic device. Still, there were some stone ruins of what once was. In the distance, I could see Little Port. So, I was relieved - happy! Still, there was much steep hilly up and down terrain to cover. My hands were callused from grabbing and grabbing the green ropes.

At the car, it was 3:35 pm. I sat for a moment, exhausted. I drank the water I had in the car, which I hadn't even taken with me, thinking the hike would be an easy one. Then I noticed a sign: "CAUTION High Cliffs/Ropes." Wow. If I'd only seen that sign in Cedar Cove! Anyhow, I took off, deciding to skip Lark and York Harbours, which I'd visited several times before in the past. Man, oh man, it had been a virtual nightmare alone in the fog and the woods.

Back on campus at 4:35, I parked, grabbed a coffee, a can of herring and some bread, and walked over to the library entrance. It was getting cold outside and was supposed to go down to just above freezing at night. I walked down the long hallway to my room. First, I took a delightful hot bath, then washed my pants and socks, then ate and wrote up the day, which was supposed to be my relax day. Instead, I'd climbed the toughest-arse mountain I'd ever climbed. My snout was runny. I kept blowing it. KO in bed at 8:30 pm.