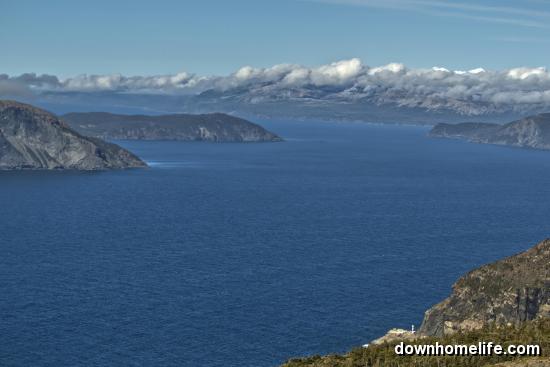 Well, I enjoyed the drive from Corner Brook to Lark Harbour. I'd always take the coastal road and stop at Frenchman's Cove to admire the orange and green punts and walk the beach, where once I'd found a large whale tooth. Then it was a short drive from Lark Harbour to Bottle Cove, where some nice old shacks and a worn-down slip on the beach. I'd been there several times before, but had never hiked a trail.

And so, I parked and walked around with my camera, taking some photos, always looking for good compositions. My goal this time was to hike the Southhead Lighthouse Trail, which led to the very end of the peninsula and wound up and down through the Murray Mountains. It was such a fine breezy day with plenty of sun, so I just wore a short sleeve shirt and long pants. Off I walked down the beach and quickly came to the trail sign, which stated the trail to be 4 km one way and 'moderate.'

Immediately the trail entered into the woods. It was fairly narrow and with streaming water now and then. But plenty of tree roots and rocks helped me keep out of the dark, squishy mud. And on and on I hiked up steep rocky rubbly hills. Eventually, I came to some ropes, which helped me climb up the terrain. I stumbled slightly on a root, then later on a rock. And on and on I hiked. There was nothing to see but thick woods. I was tempted to call it quits, but for who knows why I just continued forward, then again I was tempted to call it quits. There were no signs indicating how many kilometers to go, so I had no idea how much more of the exhausting trudge was left. The hike was beginning to feel 'difficult' not 'moderate.'

When I walked long trails, I usually wanted a prize at the end like an abandoned outport or even an interesting old lighthouse. Finally, I could see, beyond the woods, a wide clearing of marshland. But still the trail remained in the woods, up and down, up and down. Then suddenly it became large boulders. So, I had to climb over the boulders one after the next, being hyper cautious. There was nobody around but me. I didn't know if there were other hikers out there or not. I know, never hike alone, they say. Anyhow, steeper and steeper it got in the woods, and yet again I thought maybe I should call it quits. What was the point, trudging endlessly upwards through the vast woods? To see a lighthouse? Hmm.

On and on I continued forward, then bingo! Suddenly I could see the sunlight and a green field in front of me. Now, it was open, but even steeper. Yes, even steeper! So, on and on I trudged. A little lone pine tree stood higher in front of me, as if waiting for my camera. It looked like just another 100 feet or so to the top of the mountain. So, I couldn't call it quits now. By that lone tree I looked way down towards Bottle Cove at the now vast, beautiful vista. In the distance, I saw five hikers. Finally, I arrived at the top, but where was the lighthouse? Well, more endless trail, leading further and further out into the void. Ah, but the beauty of the mountains was definitely breathtaking.

On and on I walked in the open on the narrow trail (about a foot and a half wide). No signs. Nothing. It was a marvelous view downwards where a large pond and, of course, the ocean. It reminded me of, and definitely rivaled, la Cormorandire on Miquelon island south of Fortune. There were certainly spectacular views and a great boulder shaped island in the ocean with a crown of clouds absolutely mesmerized. The cliffs were extremely steep. Finally, down below in the distance I could see a white pencil, the lighthouse. A-men. I took a bunch of photos, then headed back, checking my clock this time: 4:14 pm. I wanted to see how long it would take to descend. Now, it was down steep hills. Then suddenly a couple of hikers approached me from below.

"No end! No end!" I yelled to the couple climbing up the steep hill that I was now climbing down. They just stared at me. "No end! No end!" I repeated. "Do you speak English?" asked the woman. "Yeah!" I said. "The trail is endless!" "Oh, yeah," she said. "You might be surprised up at the top of this steep hill," I said. "No lighthouse in sight! There's a lot more to go. Well, I probably shouldn't have told you that. The sign at the beginning said 'moderate.' I really think it's a lot more than moderate!" "It sure is!" they both agreed. "Maybe we should write a letter to the chamber of commerce of Lark Harbour!" I said. They both laughed: "Oh, yeah!"

And so onwards I carefully descended. Then finally back into the woods I went. Then I slipped on to my back. I sat for a moment. Well, I guess I was okay. Then before me appeared a different couple. The woman was sitting on a boulder and bathing her feet in a cool stream. We talked and ended up hiking together descending, though up and down, up and down through the woods. Deborah and Richard were their names and they were visiting from Yarmouth, NS. Deb was originally from Corner Brook and still had parents there. Richard then took my photo by the sign as we exited the darkness of the woods. I was beat. My clock said 5:49. So, just one way downwards was over 1.5 hours. Whew. Off I drove, thinking turkey wrap at Sobeys in Corner Brook. The hills were very steep driving back. Up and down, up and down. I'd forgotten how steep they were. Finally, in my car at the Sobeys lot, I ate the turkey wrap and sipped the Pepsi I'd gotten from the Grenfell Campus, where I'd stay that night.