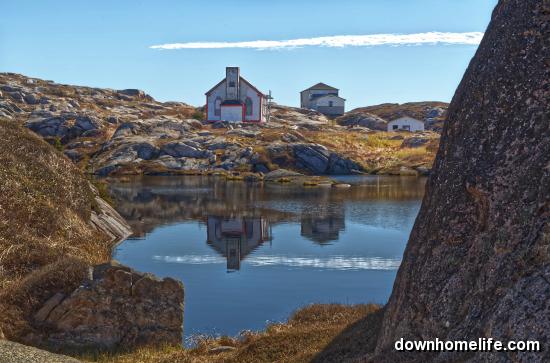 The Grandeur of Petites

The majestic houses appeared like gaping ghosts - mouths open, eyes open. Petites, on the southern coast, seemed always to be on the top of my two or three places to visit in Newfoundland. As we arrived, entering the inlet, I quickly became awe-stricken even though I'd been there in 2016. Petites seemed a bit more flattened out than it had appeared during that first visit. Still, many houses stood tall, though many without doors and windows. It was a beautiful morning: sunny and not windy. That beauty seemed to contradict the death of the outport, or maybe it rather highlighted the beauty of those old wooden structures.

At the tourist office in Port aux Basques, I'd mentioned Petites. One of the women there quickly made a phone call. And so, on the phone, Chris of Margaree Outfitters and I came to an agreement. I'd been toying with the idea of buying a kayak for the sole purpose of being able to visit such outports on my own terms. One day perhaps. So, the next morning at 8, I drove to the wharf in Margaree. There, Chris and his uncle Regge, who came along for the ride, approached me. I joked, "What do you want?!" "We're going to Petites," said Chris. "Well, I'm just here to visit Margaree," I said. They looked confused. "Hey, I'm just jokin'!" I said.

Then we stepped on to Chris' boat and took off at about 8:10. Man, it was nippy! I almost froze to death. We passed Isle aux Morts. I recognized the abandoned green fish plant. Hell, I'd slept in my car the night before parked in front of it. Then on to Burnt Islands and Rose Blanche, where we had a beautiful view of the lighthouse. It took about 50 minutes to finally arrive. And as soon as we did, I stepped off on to the old dock and off I went, mesmerized by the beauty of the abandoned dwellings, even moreso than the last time. I walked all over, taking tons of photos. I checked out the insides of a few of the houses - peeling paint and wallpaper, a wrecked chair, a rusting oven.

Down the old half-overgrown concrete walkway to the old power station, I hiked. Then over to the church, I walked. It had recently been fixed up. And indeed, inside it looked amazingly perfect. But the roof still needed to be shingled. About five years ago, I'd volunteered my time for a couple of days, but never received a response. Alas. I gazed out at the vast barrens, wondering what it would have been like to walk from Harbour le Cou. A couple of fellers had done that about a decade ago. It took them two full days. The thought of doing it of course had entered my mind...but stayed there.

And so I walked. Such a beautiful place! Chris and Regge walked a bit too. Regge seemed to be checking everything out like me, though we went our separate ways. He picked up a few souvenirs, including a little doll. I grabbed a Rose Blanche Gas Bar cap, dirty as hell, so I stuck it in a plastic bag. Then both me and Regge met up at the bottom of the inlet and checked out the inside of one of the houses. There I spotted a doll that had a face due to wear and tear like that one would see in a horror movie. It was Regge's first time in Petites, though he'd been at the wharf before. He was as intrigued as I was. He told me 'Land and Sea' had done a segment on him in Margaree.

Finally, alone I walked around the other side of the inlet, which I hadn't done the last time because I was only had an hour to visit. This time I had three hours - just right! From the wharf, it didn't look like much was there anyhow. But, wow, at the far end was a huge fish flake beaten by time of course. It was beautiful and clear testimony to Petites' past as an important part of the fishing industry. There were also a number of shacks and houses. Chris hollered from the other side of the inlet: "Want me to pick you up there?" But I hollered back and told him I'd left my bag at the bottom of the inlet.

Eventually, I stepped on the boat, and off we went. On the way back, Chris went closer to the shore here and there to give me a tour of some places, especially where a few cabins were like Brazil. He kindly gave me a beer. Then Regge gave me three ham and cheese sandwiches. Nice! He also gave me a juice. So I drank and ate. Then Chris gave me another can of beer. So, I drank that. Hell, I'd hardly stopped walking for three hours, so I was somewhat beat and hungry. When we finally arrived, Chris told me he had some red wine, so I should follow him to his house. And so the three of us sat outside there in the sun drinking away. The wine was from Cape Breton and without a label, but was very good. Chris' wife was from the Cape. She worked on the ferry for 14-day shifts. Then Wally from St. John's arrived and sat with us. What a day it had been!