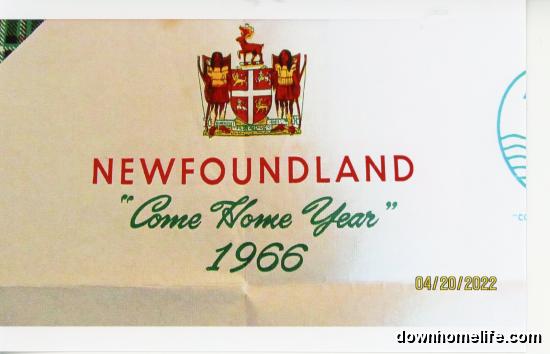 When I was a kid, my family lived in New Jersey for a few years. My family had gone there from Grand Falls, NL when I was four years old. We had flown there from the airport in Gander in February 1959. Actually, my mother and older brother had been to NJ before I was born. In earlier years, my mother and her older sister had worked at the American part of the base in Gander during WWII. My mother and two of her sisters wound up marrying American servicemen and there was a time when all three families lived in New Jersey.

In 1966 at the age of eleven, I returned to NL with my mother and two brothers. My mother had bought a 1958 Dodge Royal Lancer on April 1, 1966. An interesting feature of the Dodge was that it had a push-button operated transmission. The buttons were located on the dash to the left of the steering column. On July 9th we left New Jersey accompanied by my mother's sister and her five-year-old daughter. My uncle had mounted a roof rack on the car. He attached a wooden box to the rack. So the car was well laden down with a full roof carrier, the trunk full, and two adults and four kids. We got underway and before we even got out of New Jersey my mother lost the road map. My older brother proclaimed, "We're never going to make it." It was a long drive and we stayed overnight at a couple of motels as we wound through the New England states. We motored through New Brunswick and Nova Scotia and late on the evening of July 11th we arrived at North Sydney. Our car was the last one to get loaded on the MV William Carson. We weren't able to get a cabin by we did get day-niter seat which could recline a bit. The ferry got underway around midnight and we crossed the Cabot Strait in the wee hours of July 12th. After breakfast in the morning we disembarked and were on the TCH as we left Port aux Basques. Most of the drive was uneventful as we passed countless trees and the bogs and ponds.

Early in the afternoon we approached the town of Badger. When we reached Badger the traffic slowed to a crawl. There was a large crowd of people near the highway and there were festivities going on. There was also a lot of equipment like dump trucks, steam rollers, and a paving machine on the side of the highway. New pavement had just been completed in the area. I later learned that premier Joseph Smallwood and also Prime Minister Lester Pearson had been there earlier in the day. They had been there as part of the ceremony for the completion of the TCH and also the opening of the monument Pearson's Peak. The monument was located between Grand Falls and Badger at a point on the highway which was halfway between St. John's and Port aux Basques.

We continue on our drive, passing Pearson's Peak. As we neared the adjoining communities of Windsor and Grand Falls one of the first things we noticed was the red and white municipal water tank located on a higher elevation in Windsor. We drove into Windsor and arrived at my grandparent's house (Peter and Nellie John) who resided on King Street. It had been a long trip and we were glad to be able to see our many relatives. As a kid it was a summer of home-cooked meals, home made raisin and molasses bread. At a nearby store you could get a cold Coke, a bag of chips and a chocolate bar. I helped my grandfather saw up and stack firewood. I recall my grandmother using a wringer washer. The clothesline had a long stick in the middle for lowering and raising the line. It was a carefree summer as school became a distant memory. Come Home Year 1966 had become a reality!