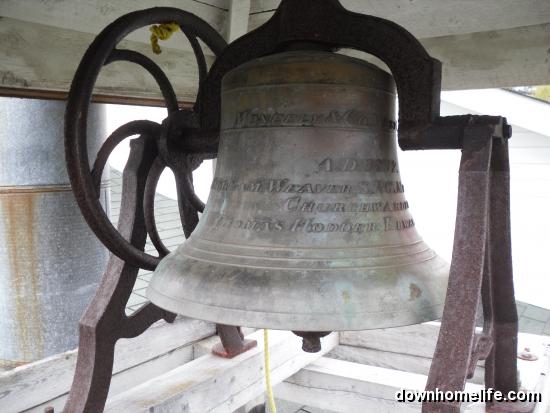 In the year 1892, the tiny outport of Ireland's Eye, Trinity Bay would see the installation of a solid brass bell for St. George's Church. This church bell would toll for about seventy years before resettlement in 1965 and it would serve as a sound and visible symbol of gathering for worship, funerals, weddings and emergencies as necessary. Meneely &amp; Company, Troy, New York was commissioned by the people of Ireland's Eye to provide this Bell complete with the following inscription: AD 1892;William Weaver, Missionary, SPG: Church Wardens; Thomas Hodder; Edward Cooper and of course the company's name; Meneely &amp; Co.,Troy, NY.
When Ireland's Eye was resettled in the mid sixties St. George's Church was deconsecrated. Church pews, kneelers, litany desk, stained glass windows along with other items were donated to other Anglican churches throughout the Diocese of Newfoundland, as it was then known.
At that time St. George's Church Bell found its new home in St. Michael and All Angels Anglican Church in Dover, Bonavista Bay. Installed in an exterior bell tower adjacent to the church the Ireland's Eye Bell would toll in that community for another fifty years until St. Michael's Church itself was deconsecrated and made available for private sale.
In June 2021 an invitation went out on social media and by word of mouth for interested persons to take part in a project to obtain the Ireland's Eye Bell before it would likely come to its meltdown demise. The plan was to purchase the Bell and have it relocated to another site making it accessible for viewing by others for years to come. Strong interest and generosity of previous residents, descendants and friends brought this project to fruition. The necessary funds were received to purchase the Bell and have it relocated and set up in Old Bonaventure, Trinity Bay. In July 2021 arrangements were made upon delivery of the Bell in Old Bonaventure for Rita Hodder, age 97, to ring the Bell even as it arrived in the back of a pick up truck. Rita Hodder and family moved to New Bonaventure at the time of resettlement and it was there she lived in her own home until her passing in January 2022. Rita was the oldest living previous resident of Ireland's Eye and therefore so fitting to have her ring the Ireland's Eye Bell.
The agreed location for the Bell is St. Luke's Anglican Church, Old Bonaventure. The deconsecrated church building is a designated Provincial Heritage Structure and is intended to be used as a museum displaying historical items, many as a result of resettlement. It is interesting to note that some items from St George's Church were already donated to St. Luke's Church and remain there to this date. The plan for the Ireland's Eye Bell includes the construction of an exterior structure on property adjacent to the Church.
While this article provides a brief background on the Ireland's Eye Bell, I have written a poem to honour our ancestors of Ireland's Eye. It can be found along with various pictures of the old Bell on the site "My Ireland's Eye Home." I was happy to be a part of the committee to help bring this project to fruition. Future plans are expected for 2022 which will see the project under the direction of a newly formed group, The Friends of St. Luke.
Since my ancestors hail from Ireland's Eye it was exciting to be a part of this venture. Growing up in Mount Pearl, when school was out, we couldn't wait to head around the bay. We spent most of our summers in Ireland's Eye up to resettlement. The years beyond saw my parents and other family members visit the island and stay often for a number of days.
Having a great interest in genealogy I decided to research the names of the Church Wardens engraved on the Bell. I discovered that Edward Cooper was Edward Cooper IV, most often known as Skipper Ned, was my great grandfather. Information I researched on Thomas Hodder is on the Ireland's Eye site. I am continuing my research on William Weaver, Missionary. He would have been stationed at Trinity, Trinity Bay. This icon is a reflection of the past life and times of people of the sea and now has been resettled to toll once again.