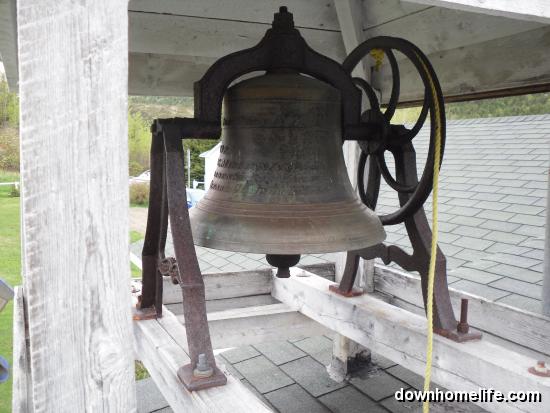 On an island of such natural beauty
Lived people of faith near the sea.
Side by side, for hundreds of years;
They fished and they loved through smiles and through tears.

The Ireland's Eye Bell rang loud and clear
For all around to come and draw near.
The people, so proud, were people of God;
They thrived and they grew on this piece of sod.

The time drew nigh and resettlement came;
The livyers moved to places with many a name.
Houses, stages and church became empty;
Lonely and still, as if saying "Do not enter."

St. George's Church in Ireland's Eye
Would be deconsecrated by and by.
The Bell from the church went to Dover.
For some fifty years it served the people over and over.

The Bell was sought and bought through love and thanksgiving;
By descendants and friends to honour forebearers' living;
This piece of history, an icon of worth
Has been returned to the bay of its birth.

At Old Bonaventure, in old St. Luke's Church
The Ireland's Eye Bell has now found its perch.
This treasure, now shared, was meant to be
A "resettled" bell, at home by the sea.