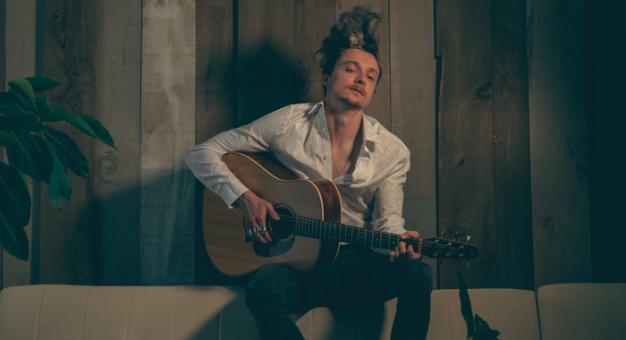 As I sit down to write a review of Youngtree & The Blooms new self-titled album, I’m wondering exactly what Peter Willie Youngtree is up to right now. Last time we chatted, Peter was on the way to a silent retreat - a seemingly unlikely place for a charismatic music maker. But then again, not for him. Peter had previously spent time at a Buddhist Zen monastery in New Mexico, learning from the same Japanese Zen master who taught Leonard Cohen. Cohen emerged from five years in the monastery with a new collection of poetry, the famous and beloved Book of Longing currently sitting on my bookshelf.
At the time of writing, Youngtree & The Blooms new record has yet to be officially released. Yet, with two singles out, he’s receiving rave reviews from the UK, Canada and the US. I’m one of the lucky ones who got sneak listen.
The album begins with “Set our Course for the Wind.” Electric guitar gently brings us in as Peter starts singing softly. I dig out the liner notes and find a welcome surprise - they’re in Peter’s handwriting. I read along as viola and cello swell and we hit the chorus. It’s an epic song that serves as one hell of an intro.
The liner notes also give credit to the stellar crew of musicians involved: The Blooms themselves, Carole Bestvater and Joe Tucker; as well as Darren Browne, Chris Donnelly, Josh Ward, Mara Pellerin, Amy Collyer-Holmes, Maria Cherwick, Chuck Boyd and Mark Feener. Based solely on this list of first-class musicians, I know I’m in for a wonderfully profound musical experience.
The album continues with “Heaven Ain’t a Lonely Road,” the first single released from the record in June 2022. Twangy acoustic guitar kicks us off, with Peter’s signature alt-country style vocals joining in. The song tells of an ailing friend pondering about mortality and what we really should prioritize in life: friendships, relationships, love, kindness and care. “I think that now I could face any kind of weather,” he sings.
The Blooms slow things down a bit on “I’m Not That Anymore,” a deeply self-aware song about self-exploration and identity. “They told me I should write songs about trucks, girls and beer, and I gave up my voice as if I didn’t have a choice,” the lyrics explain.
One might think the next track, “Can’t Be Nothin’ I Ain’t,” is a continuation of “I’m Not That Anymore,” but for this piece, we are transported into a whole new storyline - a dark tale of crime, retaliation and ensuing prison time. As someone who got into country music through a macabre interest in “murder ballads,” this instantly becomes a favourite.
Viola and cello join The Blooms on “Seas Change,” the album’s longest track at 6m26s. This is a classic tender love song; I can already imagine it playing at a wedding’s first dance. “I’m not lost, I’m with you,” he sings in the final verse, before delivering a rousing chorus and a gorgeous, layered outro.
The sixth track is “Waiting for Us (Let’s Make the Time for It),” the second single the band released, back in July 2022. In this song, Peter asks questions about when to use our voices and when to listen; the need to change and the importance of making the time to experience change. His lyrics also speak of making mistakes, learning from them, and constantly working to better yourself and the world around you. It’s uplifting and catchy, just like the rest of the record.
“Aurora” then kicks off with a blazing electric guitar riff and sorrowful violin. In this song, Peter continues posing questions. “Would the colour find your eyes if you went searching for the northern lights?” he asks. “And when that aurora blew up for ya, did I cross your mind?” I picture the scene he’s setting, and it’s just beautiful.
At just over two minutes, “I Watched You Smile” is the shortest track on the record and has a special credit to Kahlil Gibran’s book, The Prophet, which inspired the song’s bridge. Simplistic, with just acoustic guitar, this selection is reminiscent of early Bob Dylan folk songs.
The album finishes with “Got Things on My Mind,” another slower tempo piece. The lyrics are inspirational, deep and reflective. I paused the song and continued reading the lyrics, this beautiful, thought-provoking poetry. I want to write these lyrics on the inside of a greeting card and send it to a loved one - but maybe I’ll just send them a copy of Youngtree & The Blooms’ new record instead.

Wendy Rose: Congratulations on your recent MusicNL Award nominations, in the categories of Group of the Year and Country Artist of the Year. What was your reaction to this exciting news?

Peter Willie Youngtree: When I’ve received awards in the past, I’ve felt a lot of gratitude toward the community for caring enough to listen and to vote - that was particularly true when I was named the Ron Hynes Songwriter of the Year, because I knew people were considering my whole body of work for that year, which takes time, and it was nice to be recognized for it by a community of peers. But when it comes to awards and the nomination process generally, I keep a pretty stoic attitude. I figure if I get all excited and happy by a nomination or award, then I’ll have to feel commensurately bad if I don’t get one - and who wants to feel bad? Not me! I love writing music and performing, so I just try to focus on that love, without too much concern for accolades.

WR: You’ve been teasing listeners for months with singles from the new record. What kind of feedback have you heard so far, from within the music industry and from music fans?

PWY: First of all, I love when fans write to tell me about a particular lyric or moment in a song they enjoy, or some experience they have while listening to it. A lot of people seem to agree that “Heaven Ain’t a Lonely Road” is the best thing we’ve ever done. It has a very singable chorus and a driving rhythm, and the lyrics are about the paramount importance of love and friendship, which I think people vibe with… I really made an effort to let myself write more simply, less analytically, on this album, and I think people are hearing that in the music. People are also hearing how sonically different these songs are than our previous work, thanks to my fabulous band and to Mark Feener, who coproduced and engineered the album.

WR: Amidst releasing singles, yourself and the Blooms crew have had a pretty busy summer on tour… Where did you go and how did it go?

PWY: We travelled to Ontario and back, playing festivals, club shows and seated concerts, 17 performances in total. It was amazing. I met fans I never even knew we had in Toronto (thanks YouTube!), and when we arrived in Orillia to play Mariposa Folk Festival, Carole Bestvater and I walked on stage the first night for a duo set and there were about 4,000 people in front of us. The next day, I sang “Onomatopoeia” with the John Prine Band (yes, his actual band) in front of another couple thousand people - what a dream that was. After those performances, a good many people started following our band around all weekend. We definitely made new fans everywhere we went, whether in Ontario or Nova Scotia, and I don’t think any of us wanted the tour to end.

WR: Speaking of connecting with audiences, I saw your recently created TikTok account, in which you offer some guitar lessons, teaching people to play your original tunes. Can you tell me a little about what you hope to achieve by using this hip new social media platform in this way?

PWY: I hope people get to know me a little better through it, and I hope they learn some things that interest them about songwriting, guitar and production. In the tutorials, I tell some personal stories, talk about songwriting and how I came to write particular songs, and throw in some things about the production process. It’s still new and evolving, but I’m aiming to connect with fans by doing something I enjoy, and that they’ll want to watch.

WR: What’s in store for the rest of 2022 for Youngtree and the Blooms?

PWY: Well, we’re releasing our album online on October 14, 2022, and we’re doing the album release concert on November 5, 2022, at First Light Centre in St. John’s. The next single is called “Seas Change,” and we’ll be launching a music video for it as well. It’s our first-ever music video, so that’s exciting.