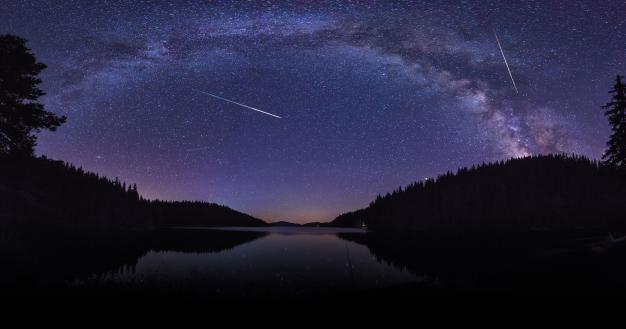 Years ago, I really enjoyed a camping trip to a secluded spot in Terra Nova. One of the highlights was to be able to sit on the shore of a quiet pond on a gorgeous clear night and look at the stars. There were so many more to see without the bright lights of St. John’s intruding. I could see the familiar shape of the Big Dipper, but I was disappointed I couldn’t pick out more constellations, or remember any of the myths or legends about the stars. I bet my ancestors, like all kinds of fishers and farmers before them, knew the night sky. They watched the stars to navigate, track the changing seasons and make sense of their place in the world.

So I set out to learn more and I consulted with expert Garry Dymond for his best tips. Garry has been an amateur astronomer for more than 50 years and was awarded the Service Medal of the RoyalAstronomical Society of Canada (RASC) in 1991 for his work in bringing astronomy education to the public. 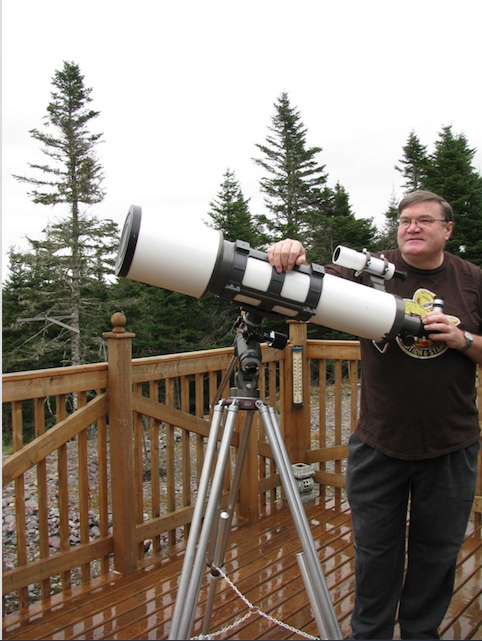 From the moon to the Perseids, here’s an introduction to August’s night sky for absolute beginners. 3, 2, 1, liftoff!

Look Up, Way Up

First, have a look at an August star chart - a map of the night sky. Search for one online and print it out, or check out an astronomy magazine or library book. The centre of the chart will show you the stars that are directly overhead. The outer rim of the chart represents the horizon, and it will be labelled with the directions north, east, south and west. This will give you an idea of what to look for including constellations, stars and galaxies.

Websites such as Google Sky, and apps including StarWalk and Garry’s favourite, SkyEye, can also help you orient yourself.

Next, choose a dark, clear night (sometimes hard to come by around here), without too much moonlight. It takes about an hour for your eyes to fully adjust to the dark, so give yourself some time outside to get set up. You don’t need much: maybe a comfortable place to sit and a pair of ordinary binoculars. To find your way around in the dark after your eyes have adjusted, Garry recommends a flashlight with a red light - you can make your own by covering an ordinary flashlight with red cellophane or paper. Then look up, waaaay up.

Let’s start with the most universally recognized star pattern out there: The Big Dipper. It’s actually an asterism, a familiar pattern of stars, and part of the constellation Ursa Major, or the Bear. The Greek myth tells of beautiful Callisto, who caught Zeus’ eye and was transformed into a bear by jealous Hera. In Mi’kmaq legend, the bowl of the Big Dipper forms a bear, and the stars in the handle represent hunters chasing it across the night sky. The seven stars of the Big Dipper are almost always visible in the northern hemisphere. Look for the outer edge of its bowl and follow about five stars upwards. There, you’ll find the North Star, the anchor of the sky.

Next, have a look through your binoculars at the moon. “The best time to see the moon is when it’s at quarter,” says Garry, noting that the added contrast makes it easier to see the dozens of craters, seas and mountain ranges on the surface. We’re all familiar with the benevolent gaze of the “man in the moon,” but there are hundreds of stories. In Chinese folklore, beautiful warrior Chang’e is stranded on the moon with a white rabbit as her only companion. In Haida mythology, the figure there represents a banished boy gathering sticks. What do you see?

If you’re lucky and the sky is dark, you can even see the magnificent Milky Way between Vega and Altair. What seems like a delicate, misty band of light is actually millions of stars in our giant spiral galaxy.

A handy tip from Garry: if a bright light in the sky sparkles or twinkles, it’s a star. If it doesn’t, it’s probably a planet. This August, Jupiter and Saturn will be optimally bright and big, and you’ll be able to see brilliant Venus, too.

Jupiter appears in the sky as a bright, creamy white object and its four big moons are often pretty easy to see with binoculars. In order outward from Jupiter they are Io, Europa, Ganymede and Callisto.

Glorious Saturn takes on a yellowish hue, and if you have a telescope you might be able to spot the rings! Try looking around the 2nd of August, when Saturn comes to opposition: the tiny ice particles that make up the rings will shine more light back towards us brightly.

Finally, every August brings around a super treat for stargazers: the annual Perseid meteor shower. “Definitely look for the Perseids,” says Garry, “they’ll be at their best on the 11th and 12th of August.” Give yourself at least an hour of observing time, and be patient. You should eventually be able to see meteors streaking across the sky in all directions, but there’s no way to predict the spurts and lulls.

The meteors seem to be coming from a point in the constellation Perseus - that’s how they got their name - but they are actually debris from the orbital path of Comet Swift-Tuttle blasting into our atmosphere!

The night sky is wondrous and full of marvels. I hope this handy introduction inspires you to get out there and see for yourself.