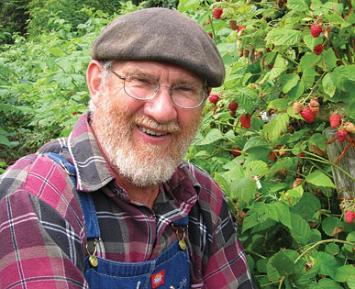 Ross Traverse has been a horticultural consultant to gardeners and farmers in Atlantic Canada for more than 40 years. His columns appear every month in Downhome magazine.

If you have a question for Ross, email him at downtoearth@downhomelife.com. If you would like to purchase a copy of Ross's Book, Ask Ross Traverse About Gardening, click here.

Problem Potatoes
I'm emailing you for my dad. He grows all his own veggies. He has a couple of gardens, but he has a problem with one of them. The garden had red soil. He plants potatoes there but they grow only one year. The next year when he plants potatoes again they wont grow. Nothing will. He's tried small seed but it won't grow. Potatoes will only grow there about every second or third year. Do you know what the problem could be? - Joni Noseworthy

A: Potatoes can be grown in the same ground year after year but you do need to improve the soil. First of all, organic matter should be added every year in the form of well-rotted manure, compost and/or peat moss. This is dug into the soil before planting. You also need a source of nutrients for the potatoes. This could be in the form of commercial fertilizer. I would recommend a formula like 6 -12 -12 with magnesium. If seaweed is available, this can be used as the source of nutrients.

It is important to have seed potatoes that have been certified disease-free. They can be purchased at garden supply shops. It is a good idea to pre-sprout the seed potatoes before planting. This is done by spreading out the seed in a single layer in a tray in a well-lit area. You do this about three or four weeks before planting. The seed pieces will develop sturdy sprouts and then you are sure that you have a sprout in each piece that you plant.

After the potatoes come up and grow about 6 inches, more soil is placed around the plants. This is to prevent the new potatoes from turning green. At that time the plants are usually side dressed with additional fertilizer.

Black Knot and Damsons
I have a relatively young damson tree and last year it bore fruit for the first time. The tree also had black knot, which I removed and burned. Is there any preventative treatment that might discourage this growth? - Geoff Winsor

A: The only control for black knot on damson trees is to remove the black knots to keep them from spreading to other branches. As far as I know, there are no chemical sprays that are effective. You should inspect the tree every spring and fall for any sign of black knot. Black knot occurs on the wild pin cherry, so if you can you should eradicate them.

Blueberry Bushes
I have quite a few blueberries growing in my garden, maybe 10-15 gallons. I've noticed that every year the weeds seem to be taking over. I have thought about burning to improve the blueberry yield, but the plants are fairly close to my house and my husband is reluctant to do this. Is there any kind of weed control product I can purchase? If I don't do something soon I will lose all these plants to weeds. I would appreciate any help or advice you can give me.
Genevieve Squire

A: If you had a brush-cutter or whipper-snipper, you could cut back the blueberry bushes tight to the ground instead of burning. This will encourage new growth and in the second year you will get increased blueberry production. It will also make it easier to clear out the weeds. During the summer, the weeds can be spot sprayed with Round-up, but you must be careful because it can also kill the blueberries. If there are any evergreens, they have to be manually removed.

Hi Ross, I have two related questions, if that is okay. 1st - I built a backyard greenhouse several years ago. In your book, which I own, you give the amounts of lime to add to the soil. I added that amount in the first year and have not added any since. Should I do that each year or just the first year? 2nd - When I measure the PH Balance, with one of those rods you stick into the ground, it shows that my soil has the right balance. Is this a reliable measurement? Thanks in advance for your help. I read and collect your articles in the Downhome magazine. Ron ron.rose.x@outlook.com

How early can I plant lettuce outside in St. John's west end?