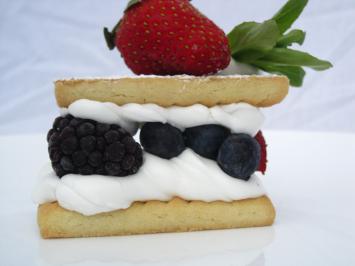 School's out and summer vacation is about to go into full swing. The following desserts make great refreshing treats for kids' parties, backyard BBQs or when you need a break from yardwork.

Whisk all ingredients together, pour into a dish - preferably a metal bowl. Place in freezer, stir every 45 minutes until set.

Bring cream, sugar and vanilla to a boil. Remove from heat. In a bowl, combine cold water and gelatin; set aside. Add white chocolate to cream mixture. Stir until chocolate is totally melted. Add gelatin mix and stir until melted. Pour just enough mixture to cover the bottom of five baking ramekins; place them in fridge to set. Once set, stir diced mangos into remaining mixture and pour into dishes. Chill until set. To unmold panna cotta, place dishes in warm water for a few mintues then turn out.

Pastry: Beat butter and sugar till combined. Mix in eggs, then add flour until blended. Remove from bowl and knead into ball, wrap and chill in refrigerator. When chilled, roll out on floured surface to about ¼-inch thickness and cut to desired size. Bake on cookie sheet at 325°F until cooked (5-10 min.); remove and chill. Spread: Combine all and mix till spreadable. Spread onto crust. Top with fruits of choice.

Combine in saucepan: cream, cardamom, brandy and ¼ cup brown sugar. Bring to boil. Remove from heat. In a bowl, combine ½ cup brown sugar, yolks and vanilla, and whisk till smooth. Gradually whisk cream mixture into yolk mixture, so as not to cook the egg yolks. Then combine all. Cut up bananas and place them in 6 ramekins, then pour mixture over top. Place filled ramekins in oven-proof pan, then fill the pan with water until halfway up the dishes. Bake at 275°F for 25-35 min. or until set. Remove from pan and chill. When ready to serve, sprinkle white sugar on top and place in oven on broil till tops reach desired brownness (watch them carefully so they don't burn).

Place all ingredients in a bowl or resealable plastic bag and toss until fruit is evenly coated. Put ingredients into oven-safe serving dish and preheat oven to 350°F. Crisp mix: Combine all ingredients and mix thoroughly, until crumbly. Add crisp mixture to top of apple and strawberry mix. Bake for 25-30 min. or till apples are tender. Remove from oven and let sit for 15-20 min. before serving (or refrigerate for later). Serve warm with a side of ice cream.

With a mixer, beat icing sugar and yolks until pale in colour. In a separate bowl and with clean beaters, whip cream until soft peaks form. Cook strawberries and rhubarb on stove until soft. Combine gelatin and cold water in small dish. Once set, add to strawberry-rhubarb mix. Fold in egg mix, then fold in whipping cream. Pour into desired mould, or pour onto baking sheet, and freeze. Cut out desired shape and, before serving, roll in white chocolate shavings or toasted crushed nuts.

In stainless-steel bowl, whisk together sugar, lemon juice, zest and eggs. Place bowl over saucepan of boiling water. Whisk over heated pot on medium heat until thickened (about 20 min.). Remove from heat and gradually whisk in softened butter, a little at a time. Once all butter is added, cover with plastic wrap and put in fridge to chill. Serve on scones or use it to fill tart shells. Top with summer berries.

Beat butter and sugar till combined. Add eggs, continue mixing and add flour until blended. Remove from bowl and knead into ball; wrap and chill in refrigerator. When chilled, roll out dough on floured surface to about ¼-inch thickness and cut to desired size rectangle. Bake on cookie sheet at 325°F until cooked (5-10 min.). Remove from oven and chill. Farm House Cream: Whip together stiffened cream, sugar and vanilla in a mixing bowl. Fold in sour cream and lemon juice. To assemble: top a shortbread cookie with a layer of Farm House cream, then berries or fruit, then more cream and finish with another shortbread cookie. Dust with icing sugar and serve.
MORE ARTICLES
load more