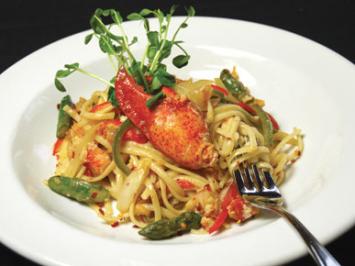 We love lobster season. While we can get lobster from other parts of the world year-round, succulent local lobster, freshly harvested, raises the bar for indulgence.

The first lobster most of us enjoy as soon as the season opens is an unadulterated feed - simply boiled lobster, cracked and eaten on newspaper, maybe with garlic butter if we can wait long enough to dip it before eating it. As the season goes on, though, it's nice to look for other ways to prepare lobster. We have a wonderful dish for you that is simple enough for a family dinner, yet you can multiply it for entertaining a crowd. With our lobster pasta dish, a couple of lobsters go a long way and they've never tasted more delicious!

Boil pasta according the the package. Drain and reserve a little of the pasta water.

While the pasta's boiling: Heat the olive oil in a large non-stick frypan or wok on medium burner setting. Add the shallots, thyme and chiles. Stir a moment, then add all the vegetables, tossing until they are almost tender. Season with salt and pepper. Add the garlic and fry a minute more. Add the wine and let cook off. Add the lemon zest and juice, tomatoes and lobster meat to warm through; taste for seasoning. Finish with cubes of butter. Toss in pasta and a couple tablespoons of the reserved pasta water. Toss all together. Divide into four warmed bowls. Garnish with reserved claw, fresh parsley, chopped tomato and lemon wedge.

Many people don't realize how much of the lobster is not only edible, but delicious! Here's a quick guide.

Tomalley ("granny"): This creamy green stuff found close to where the tail joins the body is the lobster's equivalent of a liver. Andrea enjoys scooping it out with a spoon. Mike uses it in stocks and sauces. Some folks spread it on buttered bread.

Roe ("coral"): The bright red, waxy substance in female lobsters, close to where the head joins the tail, is the lobster eggs. In freshly cooked lobster, it's delicious.

Leg Joints: Once you've pulled the legs off and chewed out the meat, notice the little joint still attached to the body. Break apart the body to find pockets of the juiciest meat.

Don't forget to use the bodies and discarded shells to make stock. On high, heat a tablespoon of oil in a large pot and throw in your shells, bodies and some herbs (thyme and bay are lovely - you could add some chopped onion and celery too). Stir the shells a few minutes until you can smell lobster. Splash in a half cup of white wine (more if you like) and let the alcohol burn off a bit. Add enough water to cover and reduce to simmer 30 mins - up to an hour. train off and use for soup, bisque or sauce.