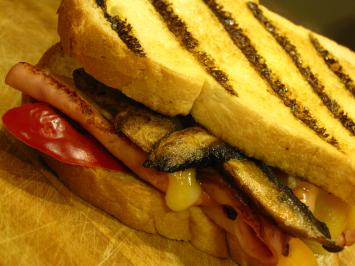 Check out these delicious, mouth-watering BBQ recipes - just in time for summer!

Bring all ingredients, except squid, to a boil and whisk. Add squid, reduce heat and cook for 10 minutes. Remove squid to a cooling rack to drain off extra liquid. Heat BBQ on medium heat. Lay squid on the grill and cook for about 7-8 min. Remove and serve hot.

First tenderize the chicken by soaking it in a brine solution (1/2 cup sugar, ½ cup salt, 3L warm water) for 12 hours. This also prevents the chicken from drying out while cooking. After soaking, remove chicken and let it air dry. Wrap each piece of chicken in a slice of bacon secured with metal skewers or soaked bamboo skewers. Season with salt and pepper. Cook chicken on BBQ at medium heat, turning and basting with maple syrup. Chicken is cooked when a food thermometer stuck in its thickest part reads 165°F. (To prevent burning the chicken, you can cook it in a foil dish on the BBQ.)

Wash and rinse potatoes, leaving the skin on. Boil potatoes until they are slightly undercooked. Let potatoes cool completely, then cut into chunks. In a large bowl, combine mayonnaise, mustard, pepper, salt and oil. Mix together well, then stir in red pepper and chives. Add chopped potatoes and toss to coat. Chill salad before serving.

Mix all ingredients together. Add grilling meat and toss to cover, then let rest in refrigerator for at least 3-4 hours (12 hours for best results). This marinate will tenderize even the toughest cuts of meat.

In a bowl, mix paprika, cumin, cayenne, coriander, cardamon, cinnamon, pepper, ginger and cloves. In a frying pan on med. heat, melt butter. Add garlic and sauté until golden, then add dry spice mixture and cook for 2 minutes. Transfer spice mix to a bowl. then whisk in the yogurt, lemon juice and salt. Add chicken and let sit in refrigerator for at least 3 hours before grilling. Any unused marinade (that never had chicken in it) can be saved in the refrigerator for up to 3 weeks.

Spread butter on what will be the "outside" of your bread slices. One the "inside" of one slice. layer grilled peppers and black forest ham, topped with cheese and marinated mushrooms. Place other slice on top, with the buttered side on the outside. Preheat BBQ on high. Place sandwich on grill and cook to desired doneness.

Drizzle oil and vinegar over mushrooms. Sprinkle with seasonings. Let sit for 10-15 minutes before grilling. Cook for about 10 minutes on the BBQ. Slice and serve.

Click here for a delicious recipe for trout filets with creole sauce, and get some tips on how to create tasty seasonings that are sure to spice up your life.

Can't wait to try these!