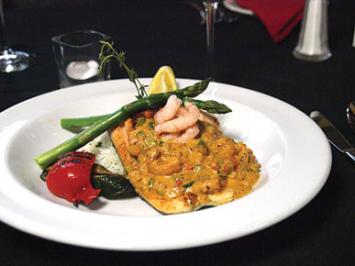 With trout fishing season opening on the Victoria Day weekend, we thought it would be appropriate this issue to tout the virtues of trout!

Like salmon, Arctic char and halibut, trout has a lot going for it. It is rich in healthy omega fatty acids; it's delicious; and because of its higher fat and moisture content, it's more forgiving of cooking methods (and skill levels) than some of the whiter and leaner fish (e.g. cod and sole). For a new or less experienced cook, trout is a wonderful starter dish. For the more experienced, trout is fabulous because its stronger flavour and firmer texture can stand up to bolder seasonings and cooking methods.

If you have smaller fish that you'd like to cook and serve whole, why not try some exotic flavouring rubs? The method will be the same, but the flavour combination is up to you. Clean and gut each fish, cut off the head and fins and remove scales. Then cut four or five slashes across the flesh on each side. Into the openings, rub your choice of seasoning, then place all the fish on a greased pan to roast in a hot oven: 400°F for 8-10 minutes. Turn the fish halfway through the cooking time. Serve with a fresh salad or steamed vegetables. Top the fish with your favourite sauce and a wedge of citrus (orange, lemon or lime).

We're using a homemade Cajun seasoning mix for this recipe, but you can blend your own choice of spices for a different flavour. (See below for our spice combination suggestions.)

Prepare Cajun seasoning by combining a mix of 2 tsp paprika; 1 tsp each cayenne, oregano, thyme and sugar; 1/2 tsp salt. You can substitute the regular sweet paprika with 1 tsp smoked paprika. Rub the filets with the Cajun seasoning - up to ½ tsp per piece - and set aside while you make the sauce.

In a large non-stick frying pan, heat 1 tbsp each oil and butter over med-high heat. Add onion, celery and green pepper; sauté until they start to soften. Add the garlic, thyme, paprika and 1 tsp Cajun seasoning, and sauté a minute or two more. Add tomato paste, stir a minute. Add flour and stir 2-3 minutes until vegetables are coated with flour. (Add more oil or butter as you need to during this process.) Add tomatoes, sugar and wine and let alcohol cook off 2-3 minutes. Add cream and let reduce a few minutes. Check seasoning and add salt, pepper and hot sauce to taste. Add shrimp and heat through. Leave sauce on low heat while you cook the fish.

Heat a frying pan over med-high heat. Add 1 tbsp each oil and butter and sear fish, skin-side down first, for 3-4 minutes. Turn over fish to flesh side for 3-4 minutes more. Total cooking time should be about 8 minutes for average thickness, up to 10 minutes if they are thick (one inch). (Alternately, you could BBQ the fish or simply bake in the oven at 350°F for 8 minutes.)

Serve filets with sauce and sprinkle with fresh parsley. Boiled potatoes and steamed asparagus are wonderful with this dish!

Indian: Mix together 2 tsp each ground cumin and coriander, 1 tsp each garlic powder and onion powder, ½ tsp each ground ginger, cinnamon, cardamom, turmeric and salt, ¼ tsp each ground cloves and cayenne pepper. For the sauce, mix ½ cup plain yogurt with the juice of ¼ lemon, ½ tsp sugar, ½ tsp dry mint (or 1 tsp fresh if you have it) and a pinch of salt and pepper. Serve the trout with a dollop of sauce.

Greek: 1 tsp each dry oregano, thyme, mint, garlic powder and onion powder. Add ½ tsp each dill, salt and pepper and the zest of a lemon. For sauce, use the Indian recipe above, but add ¼ of a cucumber, grated or chopped finely and 2 tbsp olive oil.

Herbes de Provence: 2 tsp each dried marjoram, thyme and savoury, ½ tsp salt, dried basil and rosemary, ¼ tsp dried sage and ¼ tsp fennel seeds, ground (or pounded with the back of a frypan). (Herbes de Provence usually contains a pinch of lavender but it isn't so easy to get and the flowery flavour is a bit of an acquired taste.) This is nice served simply with a squeeze of lemon.

But if you're adventurous, how about an aioli? In a blender or food processor, purée 2 cloves garlic, 1 tsp Dijon, 1 tsp salt and ½ tsp fresh ground pepper with 2 egg yolks and the juice of ¼ lemon. Very slowly, through the feed tube, drizzle in light olive oil until the mixture gets very thick - about a cup of oil. (For a lighter flavour, use half canola and half olive.) Taste and add a little more lemon juice to taste - up to the rest of the lemon. With the motor running, drizzle in a little more oil to get the mixture to thicken up again. Should be as thick as mayonnaise.
MORE ARTICLES
load more