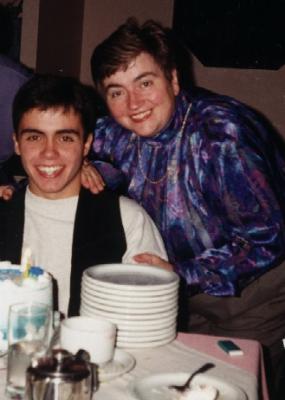 Gord Delaney and his mother, Lillie, celebrating his 18th birthday
By Alyssa Fowler

Gord Delaney, 21, was headed out the door, eager to get to the lake for some rowing practice, when the phone rang. It was the doctor's office calling about the results of his mother's blood test. He wasn't aware his mother had blood work done recently. Couldn't have been important.

When he gave his mother the message, she looked concerned. The blood test was yesterday. They only call back this quickly when something is seriously wrong, she said, grabbing the phone to call the office.

"Don't be foolish," Gord said, continuing out the door.

When he returned two hours later, he was surprised to find his aunt, uncle, mother and father gathered in the house.

"What's wrong?" he asked. For minutes, no one seemed willing or able to speak.
It was his mother who finally forced out three words. "I got it," she said.
"Got what?" he asked.

Lillie was diagnosed with chronic myelogenous leukemia. Fortunately, chronic means they had caught the cancer in its infancy and it was treatable. She was put on an interferon treatment administered by her husband, Frank.

"It was just like a diabetic would take their insulin," says Gord.

Though she was often tired, Lillie continued to lead a normal life and work at her job with the Newfoundland Liquor Corporation. On October 26, 2000, Frank took her out to dinner for her 53rd birthday. When they returned home late that evening, Gord commented to Lillie how well she looked.

"I haven't felt this good in a while," she responded cheerfully.

She went to work the following Monday and Tuesday, but on Wednesday a headache forced her to stay home. On Thursday, she stayed in bed. Friday, Lillie drove herself to the Health Sciences Centre where she was admitted immediately to the emergency wing. There she had her first seizure.

"It was like losing two people at once," Gord says. "I lost my mother and best friend."

Lillie is remembered by those who knew her as a kind, fun-loving soul who was a wonderful singer and a jokester when the opportunity arose. She was one of three children whose parents owned Rice's Store on Southside Road in St. John's. Probably no one knew just how infective she was until the day of her funeral, when more than 2,000 people showed up to say good-bye.

"There was standing room only," says Gord, who admits he didn't recognize many of the people as friends of his mother. One young man, in particular, stood out to Gord. Tears streamed down his face during the funeral as he stared broken-hearted at Lillie in her casket. Gord did not know until later that Lillie had long ago befriended this young man in the neighbourhood where she worked. It was routine for her to give him $5 to bring her a tea from the Tim Hortons nearby and she'd tell him to keep the change for himself.

Singing was Lillie's passion. She sang at Shopper's Drug Mart's Seniors Day and was once commissioned to sing at a wedding.

"The man was from Ontario," Gord remembers. "She dressed up in full oil skins and carried an ugly stick, to give them a real Newfoundland experience."

People used to love for Lillie to go to parties with them, Gord says, especially when she sang "Working Man" by Rita McNeil. Country and Irish music were her favourites. "Once she travelled to Nashville and Vegas to sing with six of her girlfriends."

Gord says, "She was just a load of fun, so full of life."

She will not be forgotten
Three years after her death, Gord was still mourning the loss of his mother. In the spring of 2003, however, a memory of one of his last conversations with Lillie inspired a new project to which he could attach positive thoughts of her and honour her life. She had said to Gord, "I know you won't forget about me, but make sure that others won't as well."

Encouraged by her words, he founded Lilies for Lillie - a fundraiser selling lapel pins he designed with the white flower and his mother's name.

"Here's my original thought process," Gord explains today. "There would be 1,000 people wearing the name Lillie." Pins are something that anybody will wear, man or woman. They won't be bought simply as a souvenir or become as commonplace as ribbons or wristbands, he adds.

In 2008, Gord decided that Lilies for Lillie should donate money to Daffodil Place in St. John's, the new home-away-from-home for cancer patients who have to travel from out of town for treatment. Any individual or group who donated $50,000 to Daffodil Place could dedicate a section of the building to a person of the donor's choosing. So Lilies for Lillie pledged to raise $50,000 over the next two years for Daffodil Place and to have an area dedicated in memory of Lillie Delaney. It was a leap in fundraising goals for the fledgling group, but they were determined, especially Gord.

"If somebody tells you that you can't do it, make sure you do it twice over," Gord says with a laugh. That year, Lilies for Lillie raised $100,000 in just two months. Today, visitors and temporary residents of Daffodil Place can spend time in Lillie's Loft.

This year, Lilies for Lillie has partnered with VOCM Cares and Scotia Bank, and proceeds will be split between Daffodil Place and the Red Cross Haiti Relief Fund. The $2 lapel pins are sold at various locations in the St. John's metro area, provincewide through Scotia Bank and, for the first time, online through the campaign's website: www.lflhome.com.