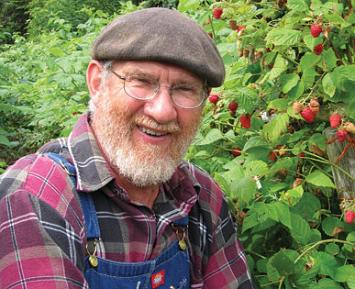 Ross Traverse has been a horticultural consultant to gardeners and farmers in Atlantic Canada for more than 40 years. His columns appear every month in Downhome magazine.

If you have a question for Ross, email him at downtoearth@downhomelife.com. If you would like to purchase a copy of Ross's Book, Ask Ross Traverse About Gardening, click here.

Pumpkin Problems
We are hobby gardeners in the small, outport community of Pilley's Island, Green Bay on Newfoundland's central-northeast coast. For the past three years we have tried growing pumpkins. The first year we had four beautiful ones. However, during the past two years, the results have not been as successful. The pumpkin growth starts out yellow and ends up a bit larger, off-shape yellow. We have basically used the same soil, added some compost and some kelp, and watered well.

Do you have any advice as to what we may not be doing correctly, and what to do to grow nice orange-coloured Hallowe'en-size pumpkins? - Dennis & Roxann Gill

A: It is important to get a variety of pumpkin suitable for our climate. I find that one of the best varieties is called "New Rocket." The seed is available from Veseys Seeds, P.O. Box 9000, Charlottetown, PEI. Telephone number 1-800-363-7333 This variety will develop deep orange colour early in the season before frost.

If you start the seeds inside about four weeks before you plant them in the garden you can ensure that you get good growth during the summer. When you set the plants into the garden, it's a good idea to cover them for a few weeks. Two-litre clear plastic soft drink bottles can be used by cutting off the bottom and putting them over the plants. A sturdy stick can be pushed down through the top of the bottle to hold it in place.

Pumpkins respond to a generous application of compost or kelp. One way to use it is to dig a hole about 2-3 feet in diameter and 2 feet deep, and fill the hole with compost material. Apply 8 inches or so of soil over the compost. Three pumpkin plants can be set in the soil on top of the compost. If you sow the seed directly in the soil, it would be a good idea to cover it with a clear plastic container or tent until the seed germinates.

During the summer, up until the end of July, you can feed the pumpkin plants with a soluble fertilizer. You can make a soluble fertilizer from kelp by filling a large barrel with kelp, then covering it with water. The kelp will ferment and release nutrients. This water is then diluted and used to feed the plants during the summer. You would use about one part kelp water with five parts clear water.


When and What to Lime
What I should be adding lime to in my flower garden? Also, how much should I be adding? I've always been timid with adding lime. If moss is growing in some areas, is that a sign that I need lime? How much lime should I be adding to a cedar hedge? Our lot will be seven years old this summer. We started from scratch by adding a lot of mushroom compost to flower beds. - Helen

A: There is an old saying that any time is a good time to apply agricultural limestone. If you were digging your garden in the fall, however, an application of agricultural limestone would be beneficial. Lime is slow to react with the soil compared to fertilizer. A fall application of lime is better than a spring application because there is a longer time for the reaction to take place, and thawing and freezing during the winter helps distribute the lime through the soil. Apply the lime to the surface and then dig it into the soil as soon as possible, preferably the same day the application is made. As a general rule you can apply lime to flowers and vegetable gardens at a rate of 5 kg per 10 m2.

The growth of moss is not necessarily a sign of acidic soil. Moss will grow anywhere other plants are not growing. Cedars will benefit from an annual application of lime when they are growing in the highly acidic soils we have in Newfoundland and Labrador.

By the way, mushroom compost is a good source of organic matter to improve the structure of the soil, but it is not a significant source of nutrients.


Lawn Fertilizer
I read your articles every month as I'm a regular Downhome subscriber. I remember in a back issue you mentioned the best fertilizer mixture to apply to a Newfoundland lawn in the spring but I can't recall what it was off-hand. - Derrick Turner

A: The fertilizer that I recommend for established lawns is 15-5-15 or one with a similar ratio. This fertilizer can be applied anytime during the growing season. You don't need a different formula for fall or spring. The application rate is 1.5 kg per 10 m2.

What is the name of the apple grown here on the southwest coast of NL in the early sixties and seventies?

good morning! I believe that my apple tree have "psylla" i have tried the Scotts EcoSense Bug B Gon insecticide soap but they are back in force. Do you have a suggestion/remedy? thank you

How can I kill the roots of a sliver alder?