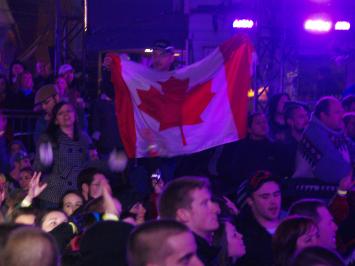 Downtown St. John's was the place to be on Sunday evening, April 18, as George Street hosted the biggest street party of the year with JUNOS on George. As the stars of the Canadian music scene schmoozed with fans on the red carpet outside Mile One Centre, the next street down hundreds of more fans crowded George Street where they were treated to a visit by Ricky and Bubbles of the Trailer Park Boys, 2010 Olympic Winter Games gold medallist Jon Montgomery and Premier Danny Williams, as well as performances by JUNO winners Arkells and Deadmau5. Once the clock struck 8, Nova Scotia rapper and JUNO nominee Classified officially kicked off the 2010 JUNO Awards broadcast and got the party started with his rousing rap anthem "Oh Canada," as a group of fans proudly holding the Canadian flag danced along behind him. The event was hosted by Newfoundland and Labrador's own Kim Stockwood and Damhnait Doyle and featured an appearance by another of the province's beloved shining stars, co-host of CTV's Canada AM Seamus O'Regan.

The crowd eagerly awaits the start of the show.

Canada AM's Seamus O'Regan pops by for a visit.

Rockers Metric take to the stage inside Mile One to accept their JUNO Award.

The crowd gets patriotic, swaying and singing along to K'Naan's hit "Wavin' Flag," as they watch the two-time JUNO Award winner performing on the screens around them at the close of the show.

Excitement on the Red Carpet


Check out our other videos, captured during 2010 JUNO Week.


Executive Producer John Brunton and Production Designer Peter Faragher talk about the JUNOS returning to St. John's, NL as they reveal the stage for the 2010 show at Mile One Centre on Friday, April 16.


The media gets a little taste of what the set can do.


Hey Rosetta! at the Delta ballroom on Thursday, April 15.


The Novaks at the Delta ballroom on Thursday, April 15.

To read about some interesting connections between the province and the top JUNO Award winners of all time, click here.

The JUNO party continued on Friday and Saturday night with JunoFest, an event which saw over 100 bands play 16 different venus over two nights in the downtown core. On Saturday night at Junctions on Water Street, JUNO Award winners Metric and Billy Talent were amongst the crowd as Halifax band Alert the Medic got everyone going with a rollicking set of tunes. Next up was Ontario band Hollerado and even though lead singer Menno Versteeg lost his voice about the second song in (which he tried to restore with an asthma inhaler and a bottle of water), the band played on like troopers, performing covers in lieu of originals and getting members of the audience and fellow rockers the Arkells to help out with the vocals.

Hollerado gets by with a little help from their friends.

Watch NHLer Mark Napier sing to the crowd, Alan Hawco take a shot at net, and Rex Goudie fend off The Rockers.

Fans and curious onlookers filled both floors of the Village Mall in St. John's on Saturday afternoon (April 17). Where the famous fountain used to be was the main stage where 12 Canadian acts met fans and signed autographs. Lines were long but moved swiftly as event security, RNC officers and first-aid responders kept a close eye on everyone. Much Music was airing live from the Village and their VJs helped keep the crowd pumped. While the public could get free glimpses of the musicians from vantage points around the rail of the second floor, only those with special wristbands could access their idols for autographs.

The New Cities and Stereos

It was pretty much a full house at the Jack Byrne Arena in Torbay Friday night (April 16) as a team of past NHL players took on a team of Rockers (the only non-rocker being Republic of Doyle's Alan Hawco). And the NHLers team included one rocker, Rex Goudie - who turned out to be a pretty good goalie. Who knew? The two-period game included an intermission filled with skills competitions, a fan shoot-out and a sing-off between Jim Cuddy of Blue Rodeo and NHLer Mark Napier. Napier won, thanks to the special lyrics he put to Cuddy's song, "Try." Gary Roberts easily nabbed the first goal for the NHLers, and while the Rockers put up a decent fight for it, the Juno Cup went to the NHLers, who won 9-8. The Juno Cup is an annual event to raise money for Musicounts, which supports music programs in need in schools across Canada.

The NHLers (with goalie Rex Goudie)

Rex Goudie, Jim Cuddy and Alan Hawco share a laugh between plays. Behind them is the game's announcer, Michael Landsberg from TSN's "Off the Record."


Alan Hawco shows off his skills


Rex Goudie in net for the NHLers


Weekend Kickoff at The Rooms

Via Rail hosted a welcome reception on Friday (April 16) for artists, industry members and guests that included a fine selection of food and drink, local musical talent, and an official welcome from St. John's Mayor Dennis O'Keefe. All four floors of The Rooms were transformed into an elegant cocktail bar with plenty of space for mingling and schmoozing.

Ben Mulroney of CTV's eTalk with Sharon Snow of NTV

Mayor O'Keefe is projected onto a ceiling screen above the crowd at the Rooms.

Media gathered together at Mile One Centre in downtown St. John's this afternoon (April 16) to get a rare, sneak-peek at the beautiful backdrop of the stage for the 2010 JUNO Awards. Giant, illuminated icebergs are the focus of this year's design, while a large, glass iceberg suspended from above the stage - the "St. John's disco ball," joked executive producer John Brunton and production designer Peter Faragher - will reflect the faces of the fans as the artists head onstage to perform and accept their awards.

A CTV spokesman stands in front of the glass iceberg

Executive Producer John Brunton (r) and Production Designer Peter Faragher (l) stand in front of the iceberg backdrop of the stage for the 2010 JUNO Awards.

Ruckus on the Edge came to an electrifying conclusion on Thursday night, April 15, when some of the best bands from Newfoundland and Labrador's rock scene rocked out to a full house at the Delta ballroom. Newfoundland funk-reggae sensations the Idlers chilled and thrilled the crowed while the Novaks continued the party with their own brand of straight-up, down and dirty rock 'n' roll. Newfoundland rock darlings Hey Rosetta! closed out the night with a bang and helped set the stage for an action-packed JUNO Weekend of music mania. If the crowd's boisterous singing and ear ringing is any indication, this is going to be a weekend that won't soon be forgotten. Check back here for extension coverage of the 2010 JUNO Weekend and of course, the 2010 JUNO Gala and Awards.

The Novaks (on screen)

Songs from the Edge

Ruckus on the Edge rocked on at the Delta St. John's Tuesday evening, April 13, where some of the province's best and brightest songwriters got together for "Ruckus in the Round: Songs from the Edge," a songwriter's circle event where Ron Hynes, Amelia Curran, Maureen Ennis, Sherman Downey, Harry Martin, Karla Pilgrim, Terry Penney and Mike MacDonald shared some of their song and stories with the crowed in an intimate and interactive setting.

Ruckus on the Edge Kick-Off

There was a ruckus at the Confederation Building in St. John's on Monday afternoon, April 12, as performers, spectators and spokespeople alike all got together to celebrate and kick start "Ruckus on the Edge," the 2010 JUNO Awards Host Committee's week of events celebrating all things music.

The choir New Canadian Voices (made up of members of the Association for New Canadians) got the event off to a rollicking good start, followed by Inuit drum group Strength of the Drum, Con O'Brien and the Benoits.

"This is Newfoundland and Labrador's time to step into the national spotlight as 2010 JUNO Week, Canada's premiere music event, begins," says Ken Marshall, chair of the 2010 JUNO Awards Host Committee.

"From our random acts of music happening today, to the 260 local artists performing at Ruckus on the Edge events in the next several days, this city is ready to Ruckus and come alive with unprecedented energy."

Also at the opening ceremony was Melanie Berry, president of the Canadian Academy of Recording Arts and Sciences (CARAS), who says "All eyes will be on St. John's, Newfoundland to witness the spirit, culture and flare that can only come from Canada's cultural capital, dubbed the City of Legends. And I have no doubt that our JUNO party here will be the talk of legends for many years to come."

For more information on Ruckus on the Edge, click here.

For more information on the 2010 JUNO Awards, click here.

Strength of the Drum

Great job with the Juno coverage!