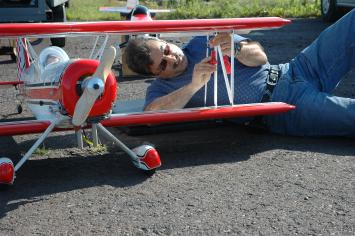 
Mel Crewe travelled a lot as an aircraft engineer, working on helicopters across the province for the Canadian Coast Guard. Work kept him away from home, and he didn't get to spend as much time as he wanted with his teenage son, Stephen. So when Stephen bought a remote control helicopter, Mel saw an opportunity to bond with his son over a shared interest in aviation.

"I saw it on TV and on the Internet," Stephen says of how he discovered remote control flying. "It seemed like a fun activity. I went down to see the guys at their field, decided I'd like to give it a try and stuck with it."

Mel adds, "I decided to spend some time with my son, get an airplane and do some flying as well."

They both joined the St. John's Remote Control Flyers, a group of radio-controlled aircraft pilots affiliated with the Model Aeronautics Association of Canada (MAAC). The St. John's club began with just 11 members in 1975; today, its 45 members use fields in Portugal Cove, Bell Island and Harbour Grace to take off and land their aircraft.

To read more, check out the April issue of Downhome, on stands now!

To watch the St. John's Remote Control Flyers in mid-air action, have a look at the video below.

Very COOL and so exciting... Phylls