Quiche Me - It's Easter! 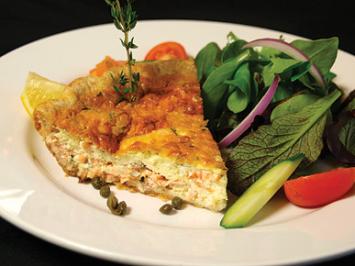 Sorry for the pun; we couldn't resist. With egg dishes being an Easter staple, we could think of nothing nicer than quiche. This dish is great for breakfast or brunch, a lovely lunch or even a light dinner. Many people are intimidated by quiche because they're worried about it setting up, or they don't get the texture they're after. Have no fear, the quiche recipe we have for you is foolproof. You can flavour it with whatever ingredients you have on hand or with your favourite combinations. We'll suggest some delicious pairings. And our trusty pie-crust recipe (you may have seen it in the moose tourtiere and chocolate silk pie recipes in previous columns) makes another appearance. It's a go-to crust for whatever you're making. Let's get cracking! (sorry, another pun!)

In a food processor, whiz together flour with salt. Drop in butter and margarine and pulse just a few times. Through the feed tube, slowly dribble in, while pulsing, 3-4 tbsp ice water. Keep pulsing until the pastry comes together in a shaggy ball - but don't over process, you'll toughen the dough. (You can open the lid part way through the water-adding process to feel how your dough is doing and adjust by adding more water or flour.) Remove from processor - don't knead, just pat together into a ball. Roll out half the dough on a lightly-floured board; make a circle a little larger than your 9" pie plate. Fit pastry into plate, letting an inch or so hang over. Trim edges and flute them with your fingers and thumb, or press down with a fork. Put pastry is the freezer to chill. Wrap unused dough with plastic wrap and freeze for later use.

Preheat the oven to 375°F. Sauté onion in butter. Add thyme and a pinch of salt and pepper. Let cool for a few minutes while you make the "custard."
Basic custard: In a medium bowl or large measuring cup, whisk together 6 large eggs with 2 cups whipping (35%) cream just so the egg is broken up and the ingredients are blended - you're not looking for volume. Add nutmeg, salt and pepper.

Mix in sautéed onions, ham and cheese. Remove pie crust from the freezer, place on a baking sheet and pour the filling into the crust. (If the plate was in the freezer longer than 10-15 min., warm it at room temp. before placing hot oven, so it doesn't shatter.)

Bake on middle rack at 350°F for about an hour until set (when a knife inserted comes out mostly clean). Let cool and set before cutting. Quiche is great with hash browns and fruit salad for breakfast or brunch, a crisp salad and fresh rolls for lunch, or a hearty bowl of soup for dinner.

For other egg recipes, check out the April issue of Downhome, on stands now!