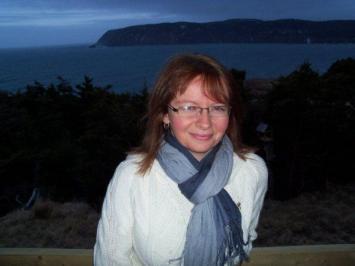 
Sitting in her office at town hall, Mayor Priscilla Corcoran Mooney is having a typical Tuesday evening. As she pours over the "Integrated Community Sustainability Plan" that has to be submitted to government by the end of March, she listens to the sounds of toes tapping, fingers snapping and lots of laughter. Just outside her office door, there's a traditional dance class happening and right after that, an aerobics class.

"We were supposed to have a community meal here this evening but couldn't," Priscilla says. "It's a busy place. It's a community full of volunteers so that makes is a little bit easy."

To gain deeper insight into Priscilla, one must first understand where she comes from. Community meals are commonplace in Branch - a town of about 300 people on the Cape Shore, along the southwest portion of the Avalon Peninsula. For the past four winters, the "Singing Kitchen" community meal has been drawing folks from all over the Cape every second Wednesday for a good ol' Newfoundland scoff (prepared by volunteers) and a scuff with friends old and new.

Branch is the kind of community where the folks living down the road are like family, where people share everything from triumphs and tragedies to teabags and table salt. A beautiful place, it echoes Ireland with its rolling green hills, sparkling blue ocean and gentle lullaby hush of the Branch River that runs through the heart of town.

To read the rest of this story, check out the April issue of Downhome, on stands now!

When she was on the town's recreation committee several years ago, Priscilla helped organize the "Well Teen Club," a series of evenings where local youth would gather to hear speakers talk about different aspects of adolescence: drugs, alcohol, healthy living and sexuality.