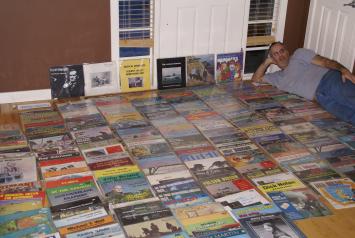 In the April issue of Downhome, Linda Browne chats with Robert Williston, curator of The Museum of Canadian Music™ and owner of the largest private collection of Canadian music artifacts in the world. Several years ago, Robert began contributing music reviews to Kevin McGowan's blog It Came From Canada (click here to visit), starting with a couple of classic Newfoundland albums.

To read more about Robert and his music collection, check out the April issue of Downhome, on stands now!

aha! a single copy can be purchased from Downhome direct if your area is Downhome-less.

Hi Ken: Fred's Records in St. John's is a great source of info for all things NL music. You can email them at info@freds.nf.net. They may even have the record you're looking for. Also, you can contact the band by visiting their website: www.theducats.ca, and going under the "links" section at the top.... Cheers, Linda

Submit you question to "Ask Downhomers" and maybe some can find the album for you...

hi,where can a fellow get the record of the du cats they released way back when thanks

Is this April issue available on stands in Calgary? I'm interested to read this particular article. The "register to read" was a tad misleading to me as well, is that a marketing tactic? "It Came From Canada" is a fun space of Canadian heritage. Thanks! to who ever is making that happen.

forgive him, he's from Ontario

wow...you made me get an account on your site so I could read this article...and then it just points me to the print version. Thanks a lot!