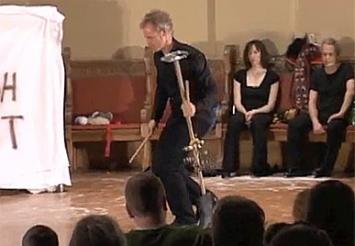 Check out the most creative ugly stick performance ever, taped during a show in Toronto put off by Gander's Dean Burry. To read more about Dean and other classical music professionals, check out the April issue of Downhome, on stands now.

he does a good job, but our friend at flowers cove dances & plays the ugly stick at the same time.

If you think that's good, go to Rocky Harbour and listen to the group Anchors Aweigh at the Rocky Harbour Hotel; hear one of their members play Wipeout on the ugly stick. Far superior!!