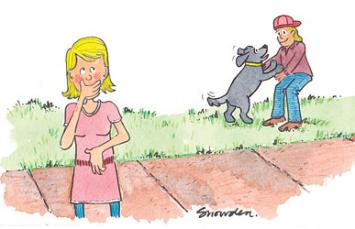 
I was born and raised in Placentia, Newfoundland and I now live in the USA. It was during my early days in Glenside, Pennsylvania that this funny thing happened. I was walking down the sidewalk when I heard a loud whistle followed by "Hey, Newfie!" I turned to see a stranger looking in my direction. Surprised by his shout and insulted by the term Newfie being used on me by a stranger, I thought to myself, "How rude!" Just then, out of the corner of my eye, I saw a blur of fur approaching and watched it run past me. Then I laughed as I realized the man had been calling to his huge Newfoundland dog!

Do you have a funny or embarrassing moment to share? Submit it here for your chance to win prizes.

Great story and funny too. I am very proud to be called a Newfie. There's nothing like us and I love Newfoundland very much. No matter where you go you are bound to meet a Newfoundlander, isn't it just wonderful.

I am also from Placentia - Point Verde to be exact. Maiden name was Skanes. I now live in Texas but still think of Newfoundland as home.

Very cute story for sure. Made me laugh! Cheers, Bernice

I am from Corner Brook originally but while I was stationed in Soest Germany at Fork York one day I was walking across the parade square and someone yelled out hey Newfie. About 2 dozen guys turned around.

I think this is funny.I am also from Placentia Bay NL and live in Pennsylvania. I found a stray cat here and I called her Newfie. hehe!!