Is This the End of the Hunt? 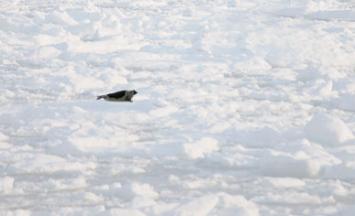 It's 12 below this morning. The sun is peering over the horizon as if debating whether or not to face this day. Hopefully it sees the Millie-May and several other fishing boats in the vast expanse of the ice floe and decides it would be shameful not to rise.

The northwest wind blows about 20 knots and the -12°C temperature feels more like -25°C across Bill's bare cheekbones. He lights a rollie, then crosses the open deck of the 45-foot longliner to the rail and stares into the ice floe. In his mind's eye, the white ice is peppered with raggedy jackets, beaters and bedlamers.

The Millie-May has been sitting in the ice for three days now, waiting for the hunt to open. She's only moved with the ice pack, rising and falling, scraping and bumping to the slow rhythm of the Atlantic water stewing beneath the ice.

He pulls his fleece jacket up around his ears, flicks his butt overboard and returns to the cramped galley where his shipmates are finishing breakfast. In the wheelhouse overhead, the VHF radio cackles and a voice is calling the skipper. Billy catches bits and pieces of the conversation. "... big patch to the north... (scratch, crackle)... a lot of young ones."

The diesel engine roars to life with a shake and a shudder as the skipper pushes the Millie-May northward through the packed ice. Within hours, Billy will be hopping deftly across the pans, focused only on gathering prey. His concern won't include the strain on his back from hauling the carcasses; the dangers of navigating the constantly shifting ice floe; the almost instantaneous death that awaits him should he slip between the pans; or the sleep he won't be getting come sundown because there will be plenty of pelting to do.

Billy is 37. He's been hunting seals for 19 years and has never killed a whitecoat.

(To read the rest of Chris' story, check out the March issue of Downhome, on stands now!)

The Sealing Industry
By the numbers

6,000+ : approx. number of sealers in Atlantic Canada, Quebec and the North whose livelihood relies partly on the commercial seal hunt

Omega-3: the healthy fatty acid found in seal meat, one of the riches food sources of Omega-3 (good for those with high blood pressure, diabetes, arthritis and more). Seal oil capsules have been marketed in capsule form in Canada, Europe and Asia for the past 10 years.

1987: the year that hunting of whitecoat seals was banned in Canada