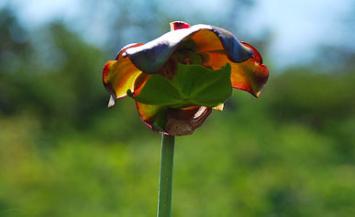 The editorial staff were recently discussing the pitcher plant and soon realized that none of us were sure why, of all the beautiful, bountiful wild flowers in Newfoundland and Labrador, the pitcher plant has official symbol status. So we went to the provincial government website and looked up "Provincial Symbols." There we found three: Official Bird - Atlantic Puffin; Official Game Bird - Ptarmigan (Partridge); Floral Emblem - Pitcher Plant. The pitcher plant we've become accustomed to, the puffin - yeah, pretty popular bird, but partridge? That didn't exactly scream "Newfoundland and Labrador" to us. We think more about whales, icebergs and moose.

So is it a time for a change? Tell us what you think. Below are the current symbols and some suggested ones for Newfoundland and Labrador. Select your favourite or suggest your own.


Downhome took this question to the street.
Click on the videos below to see what people think of our current symbols and which they would pick.

I would like to comment with a poem - PITCHER PLANT OF NEWFOUNDLAND It has a beauty all its own rare and unusual flower fair - comparing not to rose or daisy it holds its beauty close within The Pitcher draws outsiders in and once inside, exit is rare - such is the Newfoundland I know to leave is pain beyond compare and so the Pitcher Plant is chosen as her flower - wild and rare the choice is made and so remains the perfect flower of Newfoundland So visit her - but do beware you will be coaxed by beauty fair and when the time may come to leave - your captured heart will still be there!! Lorraine Bertrand Centerville, Tn. (Thanks!)

RE The Newfoundland Dog. This breed is not native to NFLD but came from the Portuguese fishermen who brought it here on theie boats years ago. I winter in Florida during and a friend has Pitcher plants growing wild on his farm. A little piece of NFLD he says.

Your editorial staff did a pretty good job getting two out of three right. The picture selected of a ptarmigan by Geri Dobbin is not a ptarmigan, but a ruffed grouse. Tom Spurrell, Lab.City

At the risk of sounding like an old fogey, what's wrong with the partridge? It's native, and it is commonly eaten in rural Newfoundland. I ate partridge a lot when I was a kid, and I bet a good many more would say the same. It screams Newfoundland to me, more than the moose, which is an import. And icebergs only stopped being a curse in rural Newfoundland when they acquired tourist value. Before that, they just destroyed cod traps and made it cold in the summer.

I had just read your article and later that afternoon the 'Land and Sea' episode aired focusing on the Pitcher Plant. Many people travel to our province just to catch a glimpse of this unique flower that is as hardy as the people of NL, what better a symbol to represent us?

i think the picture plant is a wonderful symbol for Newfoundland! keep it the way it is, more people are finally starting to notice the beauty behind it!

You should be looking at your Heritage Animal,The NFld.Pony. This pony worked hard bring the new settlers to Newfoundland. It is well known that these creatures are in a dire situation. The unveiling of a stamp by Canada Post featuring the Newfoundland Pony in recognition to its contribution to the early settlement of Newfoundland. It will take everyones efforts to ensure the Nfld. Pony contines to be a part of the equine world and safegaurd it from slipping into the shadows, as these animals are almost extinct. Jan Scanlan Bowmanville, Ontario

I can't believe the Newfoundland Dog isn't there to choose from. Known the world over, what a beautiful symbol of our province it would be. Sitting on the wharf with a Newfoundland Tartan around its neck, perhaps with Signal Hill in the background. A winner for sure. Fred Russell Port Union

Leave it as it is. everything get changed until we can,t remember the why for the change, or what was right in our time. do we have to change everything, the people of Newfoundland, are our living symbol.