My Dad, My Hero 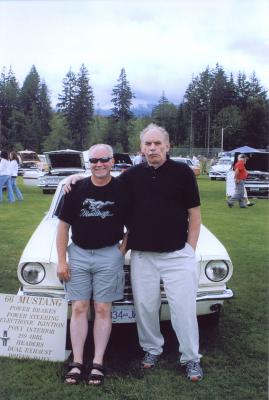 One of Dad's friends was asleep on the daybed in the kitchen, so I had to be quiet as I made my breakfast. As I waited for my bread to toast, I looked out the window across Winterton harbour. There was smoke billowing up from the far shore. First I thought it was someone barking their nets (preserving nets by dipping them in a boiling solution of conifer bark and buds). But it's Sunday; no one barks nets on Sunday. Someone's house was on fire!

I shouted to Dad upstairs, waking his friend in the process. All three of us climbed into Dad's truck and we raced to the other shore. The Powers' house was ablaze, and we were the first to arrive at the scene.

Winterton is a small town on the Avalon Peninsula where everyone knew each other well. I grew up with Wade Power, and we played ball against each other in the town's little league. I didn't see Wade, but would later learn that he had escaped the blaze.

But I did see his father and their eldest son on the lawn in only their underwear. They were so badly burnt, their skin was hanging off them.

Someone shouted to my dad, "Bill, there are two small kids still in there!"

Dad wasted no time breaking open the front door. It seemed like he was in there forever, and I was relieved to see him emerge from the burning building with one of the children in his arms. The town doctor took the child to a waiting ambulance. Dad collapsed on the ground, gasping for air.

The fire was extinguished, but not before the other child could be saved. The one child Dad brought out also died. That night as I lay in bed, I heard my father crying.

What Dad did that day was heroic, and he has always been my hero. The entire town rallied around the Power family, and held Bingo games until enough money was raised to replace their home.

Thanks for your submision - sure did enjoy it.

Cool Story Dads are all Heroes