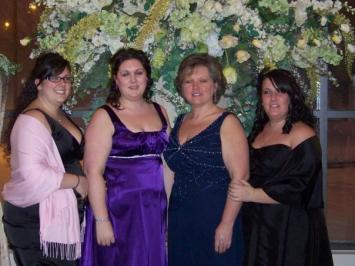 
In 1981, at the age of 19, I left my hometown of Goulds, Newfoundland, bound for Toronto, Ontario. Like many Newfies before me, my plan was to work for a year and head back to the Rock. However, 28 years later I'm still here and now call Brampton home. Life, of course, has had its ups and downs, good days and bad, but nothing prepared me for May of 2006, when I embarked on a journey that would profoundly change my life forever.

I love to drive and on this sunny spring day I had the windows rolled down and the music cranked. Winter has gone underground, pushing new life into the face of sunshine. I took a deep breath, filling my lungs with the fragrance of spring and new beginnings, put my car in drive and headed to Brockville, Ontario, four hours east of Brampton.

Life had been busy and I hadn't had time to visit my friend Brenda in a few months. I was looking forward to a much overdue chat over steaming hot coffee at the local Tim Horton's. When I pulled in three and a half hours later, she was there waiting. She still had her natural blonde hair, her usual smile from ear to ear, her arms outstretched with a hug that made you feel like you had never been away. We laughed and chatted for what seemed like an hour before she suddenly went silent.

Brenda looked directly in my eyes and said, "Cathy, I have breast cancer."
The fear that seared through her tear-filled eyes sucker-punched me in the gut. As I reached for her hand I asked, "How bad is it?"

"It's inflammatory breast cancer, a beast, and needs to be treated like one," she said.

I couldn't believe what I was hearing. This 49-year-old wife and mother of two teenage boys was facing her own mortality. This couldn't be happening - but it was.

My drive back to Brampton was tainted with fear, pain and anger. I didn't roll down the window, I didn't breathe in the fresh air, sobbing replaced the melody of song.

Five months later on October 25, 2006, Brenda lost her battle with breast cancer. I was angry and immediately started to fight back in the form of fundraising. It took my friend and I'd be damned if I'd sit back and let it take my daughters, mother, sister, aunt or me without a fight.

Six other people profoundly affected by breast cancer joined me in holding a fundraising event in February 2008. We called it the Pink Snowflake Ball and it's become an annual event. In two years we've raised more than $30,000 for breast cancer research and support. My team has since disbanded and I have assumed sole responsibility of organizing the third annual Pink Snowflake Ball. Of course, I'm never really alone with the support of my daughters (Kelly, Charlene and Krystal) as well as many family members and friends.

My goal for this year's event, being held February 27, 2010, is to sell 400 tickets and raise $50,000. I know that's a stretch, but my mother raised me to believe I can achieve whatever I put my mind to. I have hope. Brenda had hope, and I won't let her down. Each year I dedicate the Pink Snowflake Ball to Brenda's memory. I am a different person for having known her in life and in death.

Proceeds from the third annual Pink Snowflake Ball will benefit Wellspring Halton-Peel breast cancer support programs (www.wellspring.ca). Please help me help women and their families living with and surviving breast cancer. Tickets are $75 per person for an evening that opens with a cocktail hour, followed by a four-course meal, open bar and great dancing tunes.

I also need the support of the business community and/or individuals with cash or gifts for our silent auction. Here is the breakdown of our sponsorship values by donations:

If you would like to buy tickets or become a sponsor for this great cause, please contact me at pinksnowflakeball@gmail.com or call me on my cell phone at 647-808-3189. You can also visit my website at www.pinksnowflake.ca for the latest information on silent auction items, event details and listing of sponsors/supporters.

This is diffinately her calling. I am so proud of her and all that life has challenged her. She truly is a remarkable person who deserves the best in life. Her personality truly lights up any room she sets foot in, and any persons life she encounters and touches. My Sister