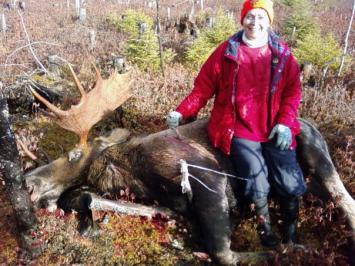 
On November 21, 2009, my cell phone alarm woke me at 5:00. I jumped out of bed and turned on the TV weather station, which was reporting a cold morning of fog, a little rain throughout the day and some sunny periods - good for moose hunting.

This was the start of my 17th day hunting in Area 42, at Crown Ridge near Gambo, Newfoundland. This is where my parents often stayed in their camper in the fall of the year, and where they had taken me and my children berry picking many times. So I knew a little of the area as potentially good moose country.

I dressed in warm hunting clothes and packed a lunch meant for two. Dad always said "Be prepared for life at all times." I jumped aboard my oldest son's Jeep and headed out of Gambo towards Crown Ridge.

It was still dark when I drove onto the gravel road, past the main bridge to the top of a hill and took a road on the right, which has a government-issued "Road Closed" sign. I had been hunting here two days earlier and had seen three moose, but by the time I got near to see what sex they were, the sun had set and I had to walk back to the Jeep in the dark.

Continuing on, I crossed an old wooden bridge and came to a fork in the road. I kept to the right because I had seen three moose there two days ago. After work the day before, I had put cups of salt on some large rocks along this road, hoping the moose would come out in the morning for a taste. At the end of the road, I parked and waited for the sunrise.

The Thrill of the Chase
At 7:30, I decided to drive to the other part of the Y in the road, where there was a forest of birch trees. I drove slowly, looking between the trees as I sipped my coffee and listened to the tunes on my iPod.

Finally I spotted fresh moose tracks. I stopped the Jeep and jumped out for a closer look. By this time the sun had softened the gravel and the tracks were easy to see. I noted three sizes of moose tracks - all male.

I got back in the Jeep and followed the tracks down the gravel road, always looking to my right through the birch trees. Suddenly, there they were - three moose about a thousand feet from me. I drove for about another hundred feet, so the sound of the Jeep would die away from them. I got out with my father's 54-year-old, .32 Special shotgun, which had killed many moose over the years.

Taking a bullet from my pocket, I slid it into the loading port and cocked the gun. As I got closer to the spot where I'd seen the three moose, I realized there were four of them. Though I walked very slowly and quietly, the moose suddenly ran farther into the woods. I followed their tracks through the birch to a cutover.

From behind a cluster of small trees I saw two bulls standing side by side, straight ahead and looking right at me. To their right were four more bulls.
I put up my father's .32 Special to my shoulder, aimed and fired at the largest bull. Bang! The moose dropped, his four hoofs up in the air. The bull next to it was looking at me in shock. The other four moose were already running away. I reloaded the gun and moved fast across the cutover, my heart pumping hard. I got about 100 feet from the moose I had shot when he suddenly jumped and began running with another bull across the cutover. I stood tall and shot again. I missed my bull, and the two kept running. I ran about 500 feet and stopped. I had lost sight of the moose but found the trail of blood that must have been streaming out of him.

I followed the trail of blood until it stopped. I looked all around but could not see the moose. The sun was in my eyes and I needed to compose myself. Breathe in, breathe out... I went to take another breath when I heard an animal's heavy breathing nearby. I followed the sound. About five feet away and to my left, behind a small spur tree, was my bull.

He was on the ground, breathing very hard. Blood was coming out of his nose and out of his left side. I walk forward and stood in front of him, knowing I had to put another shot in his head to finish him off. As I readied another bullet, he stood up and looked me in the eye.

Somehow I got the bullet from my pocket and into the loading port. I aimed and fired. For a few minutes, I stood there watching this magnificent animal lying still on the forest floor.

My heart had never beat so fast before, not even during childbirth. Finally I took a deep breath and sat on the damp ground a short distance from my prize bull.

It was 8:13. I waited 10 minutes before I getting up close to cut his throat. My chest was pumping hard, it was wild and I loved every moment of this natural high. Some do drugs - I hunt to kill and bring home the meat to my young family of four.

I Killed It - Now What?
When I finally had time to look at the rack of the moose, I counted 16 points. I thought. Dad and Mom are going to be so proud of me. I took out my late brother's hunting knife, which my mother had given to me a month ago, then I sat on the belly of the moose and phoned my parents.

My mother answered and I asked for my daddy. Mom said he was sleeping and I said, "He won't mind me waking him up this morning." Although my father has not been well over the last year or so, and at times his voice was weak, I could hear the pride in his voice. Then he started to tell me what to do next. Dad has helped me all my life. Mom came on the phone then with so much pride in her voice that she made me cry. All the while, I was sitting on the belly of my kill.

I had never paunched a moose before, so I called my lifelong friend who was away to for the weekend. He called his nephew and two of his friends who would help me get the moose out of the woods. Soon I left for Gambo, to get my son, daughter and the two friends.

As I began my walk out of the woods, I marked trees along the way with red tape, so we could find my moose later. In half an hour, I could see the Jeep up ahead on the gravel road.

To my surprise, on my right near the road were four bulls. They looked up for a moment with a mildly curious glance, then returned to their feeding. I briefly thought about killing one of those bulls because they were handy to my Jeep and I wouldn't need help getting it out of the woods. But that would mean abandoning my original kill and wasting the animal, and that would be wrong. Instead I bid goodbye to the four moose and drove back to Gambo.

After gathering my kids and the volunteers, and fuelling up the vehicles, our group returned to Crown Ridge. We walked down through the stands of birch but soon lost track of my red tape. I hadn't marked enough trees! It took us more than an hour to find my moose in that cutover.

Still I had no one with me who knew how to paunch a moose, so I called my lifelong friend again and he talked me through it. I paunched and quartered it, and together we began hauling the carcass to the vehicle. But by then we were running out of daylight and had to leave the last quarter in the woods.

That night, I could not rest! Next morning I returned on my own for that last quarter of moose. It took me two hours to get it from the cutover through the woods to the Jeep.

Back home, a neighbour informed me I had taken down a 17-point bull, not a 16-point one. There was one small point just starting to grow, and he said every point counts.

So after killing a 17-point bull moose by myself, paunching it and then dragging the last quarter out of the woods alone, I can't wait to do it again in three years when, I hope, the government issues me another licence.

Congratulations Minnie - you are one brave woman. Carolyn (cousin)

not a lover .of killing animals sorry,i love all animals,I TO think its way to much ,we need to help animals ,,not kill them .

Too graphic Christina? Better stay away from hunting. It's not for you.

Too graphic!! Why explain every gory detail of the kill? Hope your children understand the graphics,if they get to read it.

Wonderful story...very brave woman you are!!