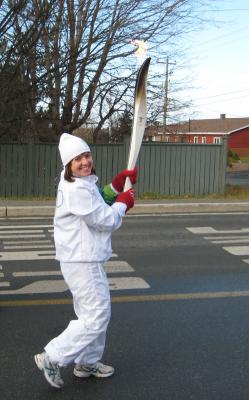 
Many months ago, I went to the RBC website to apply to be a 2010 torch bearer. People wanting to carry the torch had to pledge to make their community a better place; show how they are involved in the community; describe ways the reduce, reuse, recycle; and show the Canadian/Olympic Spirit.

So I made my pledge and when I finally got the word that I was selected as an official torch bearer, I was so proud, honoured and especially excited because I would be running just outside my hometown in Newfoundland.

The only thing that could make being a torch bearer more memorable, would be to have my police officer husband with me. So Trevor called the RCMP person in charge of the Torch Relay Security Team and asked if he could run along side me in Newfoundland and was given approval.

November 13, 2009 was the big day. Trevor had to be at Cape Spear at 6:45 a.m. security for the first leg of the relay that day. He was holding the extra lantern with the Olympic Flame (in case the original one was blown out by the high winds or some freak accident). I really wanted to be there to see this, but I had to be clear across town for an 8:00 a.m. meeting of the torch bearers. We were told if we were late we couldn't run. So I was not going to be late.

So, with a few minutes to spare, I was at my meeting place. I got my number (20) and my run time, 9:52 a.m. We were also briefed on how to carry the torch (red maple leaf towards our heart) and what our run would be like. Then the 20 of us were loaded onto a bus, along with my husband who carried the extra flame. We dropped off runners one by one, at their respective starting places.

When we got to my run spot, I searched for my family and saw my mom, then aunts, uncles and cousins. I was so happy. A security guy came to turn the gas on my torch, and I waited for the runner to come light it. I could see the guy coming with his torch lit; I was so anxious.

He lit my torch with his flame and I was off on a slight jog. Since my run portion was only 300 metres, I jogged a little then walked most of the way. It was amazing to be holding the torch, with Trevor beside me and my family and their cameras aimed on us! My run started at a Junior High School, where children lined the streets with their banners and flags, cheering and waving. It was beautiful. I stopped to let dozens of kids take pictures with me and of them holding the torch. Their excitement was the best part of the day.

In just four minutes, my run was over! The same man that lit my torch came over to turn off the gas and the flame died within about five seconds. It was a sad sight. I hugged a few family members and got in more pictures before getting back on the bus. There, officials waited for the torch to cool down before opening it and removing the gas line, then handed it back as my souvenir. I guess that's for security reasons, so it cannot be ever lit again.

That's the play by play of our busy day. But our Olympic involvement doesn't stop there. Trevor will be part of the Torch Relay Security team for three days when it comes through Kimberely/Cranbrook and onto Nelson, B.C. Then he will be in Vancouver for four days prior to the Olympics for the same role. Trevor said he was glad he got to ride on the bus with the torch bearers. The energy was amazing and he now has a good idea of how they feel before running along side them in January and February.

Meantime, I'll be volunteering at the Olympics. I will be a host at the Canada Hockey Place - cheering on Team Canada, of course!