The Story of L'Anse aux Meadows 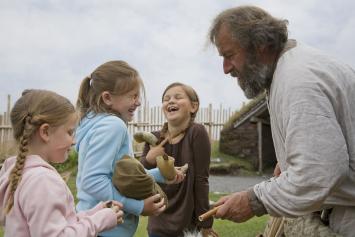 Viking reenactor Wade Hillier evokes grimaces and grins from the faces of children visiting the L'Anse aux Meadows National Historic Site. Dale Wilson photo
L'Anse aux Meadows is hosting a summer-long party in 2010 and everyone is invited! In the February issue of Downhome, Chris Hodder takes a look at what's in store for the site as it approaches its 50th anniversary. Here is some more information about the discovery and fascinating history behind L'Anse aux Meadows.

The Discovery of L'Anse aux Meadows

The early accounts of Viking discoveries, including their initial landing at North America, come to us from the sagas; ancient Norse stories that were told by word of mouth for many years, and later written down for future generations to read. The earliest written version of the sagas dates back to the 12th century.

According to the sagas, nearly 1,000 years ago, a stout, high-prowed vessel from Greenland cast anchor in an inviting bay somewhere along the coast of North America. Its single square sail was furled, and the 30-man crew stepped ashore. To the north of them, a point of land extended into the sea; beyond it was an island. The land along the coast was low and gently rolling. Lush meadows, sheltered by forests, covered the ground. A small stream flowed from a lake a short distance away. The tides were spectacular. When the tide was out, the entire bay became dry land.

Enchanted by what they saw, the newcomers decided to stay. They moved their ship into the stream and set up camp on the shore. By making short excursions they became familiar with the country, which they found incredibly rich. The streams were teeming with salmon. There was plenty of timber and the climate was so mild that the grass stayed green even in winter.

It was nearly nine centuries later, in 1960, that a Norwegian explorer and writer, Helge Ingstad, came upon the site at L'Anse aux Meadows . He was making an intensive search for Norse landing places along the coast from New England northward. At L'Anse aux Meadows, a local inhabitant, George Decker, led him to a group of overgrown bumps and ridges that looked as if they might be building remains. They later proved to be all that was left of that old colony. For the next eight years, Helge and his wife, archaeologist Anne Stine Ingstad, led an international team of archaeologists from Norway, Iceland, Sweden and the United States in the excavation of the site.

The Ingstads found that the overgrown ridges were the lower courses of the walls of eight Norse buildings from the 11th century. The walls and roofs had been of sod, laid over a supporting frame. The buildings were of the same kind as those used in Iceland and Greenland just before and after the year 1000. Long, narrow fireplaces in the middle of the floor served for heating, lighting and cooking.

Among the ruins of the buildings, excavators unearthed the kind of artifacts found on similar sites in Iceland and Greenland. Inside the cooking pit of one of the large dwellings lay a bronze, ring-headed pin of the kind Norsemen used to fasten their cloaks. Inside another building was a stone oil lamp and a small spindle whorl, once used as the flywheel of a handheld spindle. In the fire pit of a third dwelling was the fragment of a bone needle believed to have been used for a form of knitting. There was also a small-decorated brass fragment that once had been gilded.

From these finds we know not all the Norse settlers had been men. Spindle whorls and knitting needles were tools used by women. A small whetstone, used to sharpen needles and small scissors, was found near the spindle whorl. It would have also been part of a woman's kit. A great deal of slag from smelting and working of iron was also found on the site together with a large number of iron boat nails or rivets. This, more than any other find, led archaeologists to identify the site as Norse.

Over the years many different peoples inhabited L'Anse aux Meadows and many researchers have contributed to our understanding of this important archaeological site. The following is a brief historical summary of this site.

1914
W.A. Munn of Newfoundland hypothesizes that the Norse landed at L'Anse aux Meadows.

September 8, 1978
Site is recognized as one of the world's major archaeological properties and is designated a UNESCO World Heritage Site.

August 2, 1991
"Vinland Revisited - One Thousand Years of Discovery." L'Anse aux Meadows is visited by the Gaia, a replica Viking ship on a voyage from Norway to Washington D.C.