My First Taste of The Ledge 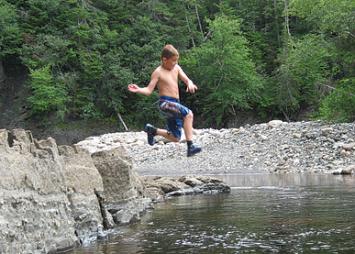 Our two sons have been visiting a place they call "The Ledge" for two summers now. They say the scenery and swimming in this area along Kippens River near Stephenville is second to none.

Watch Michelle's kids in action at "The Ledge."

So one Sunday in May 2009, about two hours after the boys had left to go to The Ledge, I decided to try to find them. I had a general idea of where the trail was from their descriptions. After walking about two miles along the power lines and seeing their tracks at some points, I made my way across two bogs. When I got to a third bog, I could see no possible way to get past it without either sinking up to my knees in the bog or getting caught up in very dense forest on either side. I tried calling my son's cell phone several times for guidance, but his phone wasn't picking up the signal. I gave up and went home.

About two hours later I was grocery shopping when my son Stephen returned my call. I explained what I had tried to do, and he was quite excited at the chance to show me this special place. He suggested I drop my groceries off home and come back up the trail. He said he would meet me and show me how to get to The Ledge - plus he wanted me to bring some food because they were starving! So I unpacked my groceries, made half a dozen peanut butter and jam sandwiches, grabbed a bag of apples and met Stephen at the third bog.

I discovered that the kids did go around the bog, forcing their way through the trees, bull-moose-style. So I did, too - branches scraping and ripping at me until I got to the other side. I figured surely that must be the worst of it. HA!

We hiked another half-mile or so until we came to the top of a huge, extremely steep bank with a raging river down below. I would've never thought in a million years any rational person would ever try to climb down that slope. I watched in a mixture of horror and astonishment ¬ even a little pride - as my son Stephen began scrambling down the bank backwards, grabbing onto trees and their roots to support him as he went. Then it was my turn. All the while I was cursing under my breath and saying out loud how insane this was. Then I remembered the kids saying something in the past about rappelling down a rock cliff with a rope.

Sure enough, we came to the rock cliff. The good news was that it was only about 20 feet to the bottom. But to get there, you had to make your way down slippery, slimy slate desperately holding onto a three-quarter-inch nylon rope with knots tied about every foot and a half. Stephen grabbed it, turned around to face the cliff and rappelled down as well as any professional rock climber I've ever seen.

Still at the top, I was near wetting my pants with fear, but not wanting to let my 13-year-old think he has one-up on me. I grabbed this God-forsaken rope and made my way down. I discovered in those moments that it's true what they say - it's impossible to "soil" your pants when you're terrified because your butt is clamped so tight you'd be lucky to "do it" a week from then.

I got to the river's edge, thinking surely God in heaven this was the worst of it. But then I saw the next section. Stephen, his brother Michael and their two buddies were about 50 feet down from my position, scaling the side of a very loose slate-rock bank about two feet above the raging river. The water was only about three or four feet deep, but the water temperature was below freezing. I was savagely ticked off at this point and ready to just sit there and cry.

But Stephen egged me on. "Mom, come on!" he called out. "Just use your feet to guide you along and try to grab the rocks."

His enthusiasm inspired me again, and I began negotiating my way along the loose rocks. I thought, "My children and their little buddies are obviously carrying the genes of a freaking mountain goat! How can you grab crushed slate rock, let alone get a firm footing on it?"

After a good 30 minutes of slipping, gripping and muttering more foul language under my breath, we finally arrived at The Ledge.

As I looked around at the raw beauty of the place, I could easily see what our sons had fallen in love with. A sense of absolute peace overcame me immediately and I could imagine there wasn't another human around for millions of miles. The only sound was the soft ripple of the water running over the rocks and rushing through the rapids in some narrow areas, and the intermittent squeal of delight as our youngest child, Michael, leapt into the icy river!

We walked all around, then sat down on a sandy section to eat the snacks I'd brought in my backpack. The high cliffs sheltered us from any wind and the beautiful sun warmed our faces.

The river ran in an S shape between two rocky cliffs about 75 to 80 feet high. There were a few trees and some vegetation growing along the top, but the cliffs looked to be mostly layers of slate rock marked by years of river washings. The water was crystal clear and there were several areas of rapids that the boys had great fun floating down. They would eventually come to a big open pool with a sandy bottom, and because it was so deep and wide it was the perfect swimming hole.

My sons had indeed discovered paradise hidden right in the midst of our tiny community. We even found one stretch of sandy beach overlooking the natural pool, so while the boys played I laid down and soaked up the sun. This truly was heaven on earth.

About then a rather horrifying thought flashed through my mind: I had to eventually, somehow, climb back up what we had just come down. My "organs" clamped up tighter than a clam and my stomach began to roll. I was sure the trip back was surely going to be at least 10 times harder than the trek in.

It couldn't be avoided if we were ever to be seen again, so with trepidation I followed the sure-footed boys along the slate riverbank. The six-inch path they had dug in the cliff with their feet didn't seem to like my weight, as every time I tried to find footing in the slate, it would give way. I eventually made it past this cliff section, but not without uttering yet another few foul words under my breath. A trip to church would be in order this Sunday for sure.

I came to the rope section and "slimy cliff of hell" - I believe this section is how The Ledge got its name. Climbing up a knotted rope on a slimy rock bank proved amazingly difficult, only to be following by a death-defying scramble up the rest of the bank, fighting with the roots, stumps and mud. It was about then that the second layer of my lungs tried to come out through my nostrils (I thought I'd lost the first layer somewhere on the jaunt down). It was still another three miles to go across three bogs and through the tangle of forest before I'd be in the comfort of the car.

When my alarm went off at seven the next morning, I automatically swung my legs over the edge of the bed and planted my feet on the floor. My groggy mind didn't yet register the adventure of yesterday and it's lingering effects, but my body sure did. My legs immediately buckled in pain and I fell back on the bed, groaning like a bear being butchered. I hurt in places I seriously never knew it was possible to hurt.

So if any of you would ever like to try the ultimate adventure, I invite you to follow my kids some day on one of their trips to The Ledge. I promise you it's an experience you will not soon forget.

Awesome story Michelle. I was there several years ago but we left from Romaines bridge and followed the river up to The Ledge. Now since the flooding I guess that has all changed.