Mummers on the March in St. John's 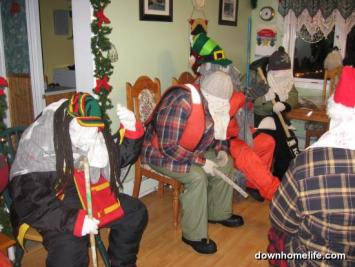 Mummers at St. Brendan's, Newfoundland. Wanda Healey photo.
This year marks the Heritage Foundation of Newfoundland and Labrador's first ever Folklife Festival, which will each year encourage residents to celebrate a traditional part of their culture. The focus of the 2009 festival is mummering; the main event is a mummers' parade.

"It's supposed to be a participant-driven parade, so the people will make the parade. We're hoping there are going to be more participants than spectators," says Ryan Davis, folklife intern with the Heritage Foundation of Newfoundland and Labrador (HFNL).

The parade is tentatively scheduled to take place December 20, and will leave from MacPherson Elementary School on Newtown Road in St. John's, pass through Georgestown and end at The Rooms.

Ryan says he would like to see a variety of cultural costumes gracing the parade, including, of course, the traditional mummer. A similar custom is the "Ribbon Fool," once common in the communities of the Northeast Avalon.

"(The ribbon fools) would wear black pants and a white blouse, and the shirt and sometimes the head would be covered in ribbons and other trinkets and jewellery," says Ryan. But unlike mummers, they aren't necessarily in disguise. A mummering tradition from the Inuit culture, called "Nallajuks," would also be a welcome sight at the parade.

"They are known to be especially fierce in their behaviour," says Ryan.

Traditionally, Nallajuks would enter homes and intimidate children into good behaviour. "They'll ask in very angry voices, 'Have you been respecting your parents? Have you been a good child?' these sorts of questions."

If you aren't sure what to wear in the parade, stop by MacPherson Elementary prior to the start of the event. The HFNL will be hosting a "rig-up," where participants may create last-minute costumes from a wide variety of random pieces.

Although the focus of the Folklife Festival will change from one year to the next, Ryan hopes the Mummers' Parade will take on a life of its own this year and become an annual event.