How to Get Your Moose, B'y 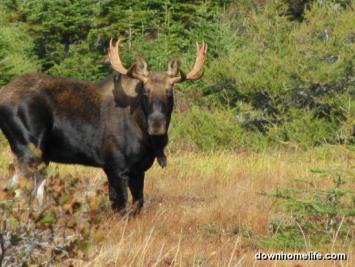 In many areas of Newfoundland and Labrador, moose-hunting season is in full swing this time of year. To help make sure you don't return home empty-handed this season, we've gone to an expert to learn the secrets to success in moose hunting. A licensed guide and outfitter with more than 40 years of experience hunting moose in Newfoundland, Art Ryan of Doyles shares his own tried and true techniques.

Call them to you

Hunters can purchase pre-recorded moose calls at a wide range of prices; however, Art says you need nothing more than your own hands curled around your mouth to deliver a moose call. Making the sound through a rolled up piece of birch bark works just as effectively, he adds. The most successful sound to call a bull moose is the cow call, "the long bellow," says Art. But, he cautions, some hunters are foiled by their own impatience, calling too often and making moose suspicious. "A lot of times, just call once and that will take care of it. It might be a couple of hours before a moose shows up, but you shouldn't call any sooner than another 20 minutes to a half hour."

You might think it's pertinent to sit still and remain silent while waiting for moose, however, this isn't always the case. If you make the right noises, you may actually mimic another moose and act as a lure. If you hear a moose calling, crack tree limbs or make other sounds a moose might make while moving through the woods.

Select an area that includes several different types of woods because moose will likely be in a place that has a wide variety of vegetation. Being near a large source of fresh water like a pond is not necessary in Newfoundland, adds Art, who says he's never seen a moose feeding at a pond in all his years of hunting. Our climate is so damp that moose in Newfoundland don't need to tie themselves to a pond.

"The perfect scenario for hunting in the woods if you're walking would be a very wet, damp day, with misty rain and a good low pressure - where the smoke comes out of the chimney and goes right straight to the ground," says Art. This weather impedes a moose's ability to catch your scent, and it allows for quieter travel. And to further disguise your scent, try your best to be downwind of a moose.

One of the most common mistakes Art sees in new hunters is their tendency to get overexcited when they sight a moose. Such individuals may shoot too soon, which may result in a miss - or worse - shooting at the wrong part of the moose, which may inflict a long period of suffering on the animal. "Avoid a head-on shot at all costs," warns Art. "The perfect shot is right behind the shoulder - not on the shoulder - behind the shoulder. You've got a big area there where the moose is going to die quick. (The bullet) is going to go through the lungs and a lot of times they don't even know they're dying." Art adds that the area behind the shoulder is the easiest place to aim for and shoot successfully. For an individual with experience hunting moose with a rifle, shooting at a moose within 200 yards is adequate, says Art. Hunting with a bow is enticing for experienced hunters looking for a challenge. But, he says, "With a bow everything got to be so perfect. You got to be within 40 yards, but 20 to 30 is ideal."

"If you shoot and a moose drops right away, expect him to get up and run," warns Art. "A moose got a very touchy nervous system. I've seen a moose drop just by cutting the hyde...but once they get over that initial shock - and you haven't hit him in a vital area - he's going a long ways after he gets up." So, if you've got to lose sight of your downed moose in order to reach it, Art advises staying put for about 10 minutes to keep an eye on the animal. "Give him some time to lay down and get relaxed and stiffen up so it's hard for him to stand back up again. If you go running off after him right away, he'll just jump up and he's gone - and he probably won't lay down again for a long time."

Click on "Food and Leisure" for a delicious recipe for Moose Pate.