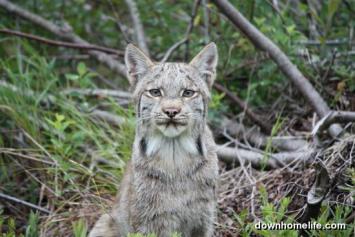 Photos and video taken east of Gander on the Trans Canada Trail. Photos and video footage courtesy of reader Darrell J. Miles.
The editors of Downhome were more than a little surprised when a reader submitted his photos and video footage of a lynx he came across in the wild. The reason? Although Canadian lynx are common in Newfoundland, sightings are extremely uncommon. Here, we've compiled some interesting facts about the lynx, including some of the reasons why these wild cats are so elusive.

• Look out, Hare. The lynx's preferred food is almost exclusively the snowshoe hare. In fact, the lynx population tends to mimic that of the snowshoe hare population. When hare numbers are down, so are lynx numbers, and vice versa. When snowshoe hare are not plentiful, lynx will feed on other creatures, including rodents and birds. Lynx have even been known to attack and devour young moose and caribou - not exactly a cuddly kitty.

• Built-in Snowshoes. The lynx is well adapted to its Canadian climate, with large, furry feet that make travel over snow and ice possible.

• Home Sweet Home. The Canadian lynx is found across Canada, from Newfoundland to the Yukon. Lynx typically prefer to live in the deep boreal forest, one reason why sightings are so rare. Where snowshoe hare are found in high numbers, so too, are lynx who feed on them.

• Prefers the Nightlife. Another reason why lynx sightings are not common is due to their nocturnal sleeping pattern. Lynx typically only come out at night to hunt their prey.

Cat's Meow. If you've never seen a lynx, you've probably never heard one, either. Canadian lynx actually make the same sounds as the average housecat, though much louder.

• Shy, Usually. Lynx are timid, wary creatures that tend to keep themselves hidden from sight. Even experienced hunters rarely catch a glimpse of these majestic creatures. Although lynx attacks on humans are extremely rare, all wild animals are unpredictable, so if you do happen upon a lynx, exercise caution.

• I Am Not a Bobcat! The lynx is most often mistaken for another wild cat, the bobcat. Bobcats are most plentiful in Nova Scotia - and are not found in Newfoundland. Although the two species share many characteristics, there are subtle differences. The lynx is smaller than the bobcat, but may appear larger because of its thick coat. Unlike the bobcat, the lynx has pronounced ear tufts and an entirely black-tipped tail (the bobcat's tail is black-tipped except on the underside). Bobcats do not have large feet, so it is not as adept as the lynx at travelling over deep snow.