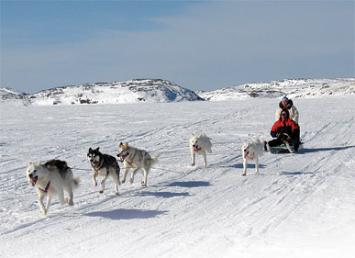 If your idea of fun is playing in the snow and ice, taking in live entertainment and competing to win, then Labrador is your winter destination of choice. Labradorians like to do winter up big, with jam-packed outdoor carnivals and contests that take competition to the extreme. In anticipation of another wild Labrador winter, we've compiled an itinerary of some of the most exciting events scheduled to take place this year. Pick the activities you'd most like to participate in or watch, then plan your vacation in a place that was truly made for winter.

2010 Olympic Torch Relay Comes to Labrador
Date: November 11, 2009 (tentative)
Locations: Labrador West and Happy Valley-Goose Bay
The 2010 Olympic torch will be passing through Labrador City, Wabush, Sheshatshiu, North West River, Hopedale and Happy Valley-Goose Bay along its more than 45,000-kilometre journey to the 2010 Winter Olympics in Vancouver, British Columbia. Two places, in particular, have been designated "celebration communities." Afternoon celebrations in Labrador City will include a special performance of the Olympic Torch Relay theme song, sung by a compilation of choirs from Labrador City, Wabush and Fermont (Quebec). Later that evening in Happy Valley-Goose Bay, local entertainment will be provided by the community choir, the children's choir, the Flummies and the Drumdancers.

Winterlights
Date: Early December (date TBA)
Location: Happy Valley-Goose Bay
Again this year, Happy Valley-Goose Bay plans to be all aglow during the Christmas season. Winterlights Celebrations are held each year in several communities across Canada. Homes, businesses and the community at large kick off the festive season by decorating with lights. Judges from the national Winterlights program spend a few days judging the colourful displays as well as community events. The switch will be pulled at the opening ceremony at the town hall, revealing the municipality's stunning lighting displays. The town's Santa Claus parade and Santa Claus breakfast also take place during the Winterlights festivities. The town has won awards for its Winterlights attractions in the past, so Happy Valley-Goose Bay is definitely one to watch this season. This year, watch for a special lighting display along Hamilton River Road.

Eagle River Dart Tournament
Date: February 5-6, 2010
Location: Port Hope Simpson
For more than 20 years, residents have travelled in droves from all over southern Labrador for the Eagle River Dart Tournament, which takes place in Port Hope Simpson's recreation centre. If you're interested in participating in this year's event, call by mid-January to register your team for two days of fun and camaraderie. If your team has great aim, you could walk away with a cash prize - and bragging rights, of course. And after all the darts have been thrown, kick up your heels at the dance, which will take place this year on Saturday, Feb. 6.

Makkovik Music Jamboree
Date: March 2010 (date TBA)
Location: Makkovik
The Makkovik Music Jamboree is a true community event, bringing together people of all ages and all walks of life for an evening of great music. Performers typically arrive from all over Labrador for the unique musical event, which usually features a performance or two in the Innuttitut language - a rare and special treat. This year will mark the 16th annual jamboree.

Heritage Sled Dog Race
Date: February/March (date TBA)
Location: William's Harbour
Get to William's Harbour bright and early on the day of the Heritage Sled Dog Race. Participants take off with their team of six dogs from the southern Labrador community around 9 a.m. for the 20-mile race, which takes about two hours to complete and ends back in the William's Harbour. Funds raised in the community pay for the cash prizes bestowed on winners (though win or lose, all participants walk away with a prize). Participants travel from all over Labrador to participate in this annual event - and many come out just to watch. When the race is over, drop by the community hall for refreshments, try your luck at the spinning wheels, and help your kids reel in prizes from the fishpond.

Winter Carnival
Date: March 2010 (date TBA)
Location: Labrador City
The Winter Carnival is seven to nine days of jam-packed fun and activities. Take part in the snow and ice sculpture competition (or just marvel at the masterpieces), take a twirl on the soccer pitch-turned outdoor skating rink, warm up at a community bonfire or watch the Zamboni Olympics in the arena. If you're a snowmobiling enthusiast, drop by the arena to watch a parade of antique snowmobiles and stick around to meet the Cain's Quest participants before they set off on the ultimate journey. Children can get in on the Cain's Quest action by participating in a mini Cain's Quest race, which takes place on a groomed trail around the Gord Young softball field. Cap off the Winter Carnival fun by attending the banquet and dance, where you'll get to watch the winners of Cain's Quest receive their awards.

Labrador Winter Games
Date: March 7-13, 2010
Location: Happy Valley-Goose Bay
Hailed the "Olympics of the North," the 10th Labrador Winter Games will bring together close to 600 volunteers and 450 athletes who will compete in events that will test the true northern spirit. During the "Labrathon," athletes will work their way through a course covering approximately 500 metres while undergoing a test of skills a trapper would need to survive on the Big Land. The highlight of the entire event is the "Northern Games," a four-part competition held over two nights, consisting of events like the "Seal Race" and "Labrador Hurdles."

Cain's Quest
Date: March 13-20, 2010
Location: Labrador City
The longest race of its kind in Canada, Cain's Quest Snowmobile Endurance Race will push your body, mind and machine to the limit. Guided by GPS and pure adrenaline, teams of two riders race day and night against wild weather and freezing temperatures along more than 2,500 km of rugged terrain to win $65,000 in cash. With riders starting and ending in Labrador City and travelling as far north as Nunatsiavut, this event brings a whole new meaning to the term "extreme sports."

SnoBreak
Date: March 20-27, 2010
Location: Happy Valley-Goose Bay
A week-long celebration of everything winter, SnoBreak offers something for the whole family, from geocaching and gospel nights to ice carving, talent shows, turkey curling and tobogganing. Participants can also enjoy snowmobile rides along Labrador's beautiful trails, complete with boil ups (and maybe even some ice fishing). If you feel like letting your royal side show, enter to be the new SnoBreak king or queen (or SnowBaby for the tots). This winter's 10th anniversary event will also honour SnoBreak founder Paul Williams, who passed away several years ago after a battle with cancer.

Great Labrador Loppet
Date: March 27, 2010
Location: Labrador City
The only loppet running between two provinces, the Menihek Nordic Ski Club's 35th annual Great Labrador Loppet will see skiers of all stripes and skill levels hit the slopes to participate in a 10, 27 or 54 km event, running from Fermont, Quebec to Labrador City. The groomed trails are equipped with rest stops and feed stations so competitors can refuel before getting back to the action. Afterwards, participants can sit back and relax (or kick up their heels) during the steak supper, dance, and award presentations.

Big Land Loppet
Date: March 27, 2010
Location: Happy Valley-Goose Bay
The annual Big Land Loppet, sponsored by the Birch Brook Nordic Ski Club, brings together people from all over the country to take in the beauty of the Labrador wilderness along scenic ski trails of 4.4, 11, 22 and 44 kilometres. Those from ages seven to 70 have participated in the loppet. In the days leading up to the event, the trails are groomed and a group of dedicated volunteers work to get everything in place, from the food and drink stations along the trails, to the cowbells at the finish line. After the event, skiers can warm up in the club's big, beautiful and newly constructed chalet.

Big Land Challenge Dog Team Race
Date: March (date TBA)
Location: Happy Valley-Goose Bay
Held annually in Goose Bay's Terrington Basin, participants in the Big Land Challenge Dog Team Race use traditional Labrador komatiks instead of basket sleds to traverse across 20 km of frozen land and water. The event is as much about keeping the Labrador spirit alive and preserving and celebrating an important part of the area's history and culture as it is about providing both participants and spectators with a thrilling experience.