The Bully of Pond Head 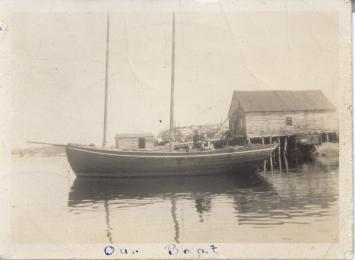 The Bully
The story in January's Downhome (2009), "Life of an East Coast Skiff," brought to mind my father's boat, which seemed almost identical to the Hollo. It had two sails and a jib, and was 33 feet long. It was also powered by a 7 Acadia engine. My father's boat was always painted black with white trim, and the sails were made by my mother on her old foot-pedal sewing machine.

My father was Arthur Burry of Greenspond, Bonavista Bay. He was a fisherman, but during the Depression years he went to New York to work. When he returned and resumed fishing, he felt he needed a bigger boat. To get the necessary building materials, he had to go "up the bay," which was around Locker's Bay or Indian Bay. He would then cut the logs and bring them back to Greenspond to be sawed into timber. Money at that time was very scarce and he had to sell his overcoat, which he had bought in New York, to get enough money to pay for having the logs sawed at the sawmill.

It took him two years to complete the boat. I well remember the day he launched it off the slipway. Several of us young ones climbed aboard to have the thrill of feeling it splash into the water of Pond Head. He named his new boat the Moil, meaning "toil and hard work." But to all of us the boat fondly became the Bully, and as long as the boat was anchored in Pond Head, that's what she was called.

When the fishing season was over, my father used the boat to go "in the bay" and bring home firewood for his family and other families. On the last trip he made, he would cut down Christmas trees to bring home, since trees were scarce on Greenspond Island. This would bring smiles to everyone's faces.

His new boat had a cuddy equipped with a little stove and benches. One of my fondest memories of the Bully was the cook-up on her when the vegetables were harvested for the year. As the moon shone and the aroma rose from the cuddy, we would dance on the deck, keeping step to our own singing. Later in the winter, with Pond Head frozen, the boat became our resting place while we skated in the moonlight.

One winter, a severe windstorm came up and the swell from the ocean started to break up the ice through the tickle leading into Pond Head. Early one morning we heard a terrible banging on our door and men yelling, "Arthur, come quick! The Bully has broken loose!" When Pop looked, the ice had broken up and the boat was drifting out the tickle to the Atlantic Ocean. Fortunately, with the help of those men, my father did save his boat in that awful storm.

Upon retirement from the fishery, the boat remained anchored in Pond Head for a few years. It was eventually sold to a man living in nearby Wareham. What remains for my family is this photo of the Bully and a model of it made by my uncle, Andrew Wornell. I hope this brings back as many fond memories to the people of Greenspond as it does to me and my family.

I love the old photos of Newfoundland & Labrador boats, and what an awesome, informative story to go with this one. Thanks for sharing it with us.