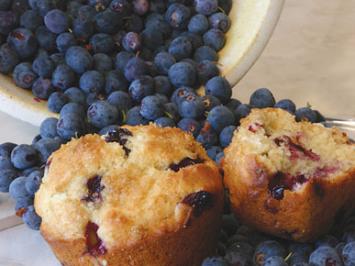 In the October issue of Downhome, we reveal the tasty results of this year's Best Berry Recipes contest. We received so many scrumptious recipes, we decided to provide extras, that couldn't fit in the magazine, right here.

And, we just launched our next Best Berry Recipes contest. Click here to add your favoruite recipe.

Mix together crumbs and butter, press firmly into baking dish. Spread with jam and sprinkle with berries. Beat cream cheese until smooth; add sugar, eggs and vanilla, beating until well blended. Spread over berry mixture. Bake for 30 min. at 350 degrees or until slightly "puffed" and light brown. Let cool. (You may use any combination of jam and berries. Add 1/4 cup more sugar for partridgeberries.)
Submitted by Kim Warford of King's Point, Newfoundland

Base: Combine flour, baking soda, baking powder and salt. With your hands, rub the butter through the dry ingredients (above) until crumbly. Add sugar and oats; mix well. Spread 1/2 of the mixture into a greased 9 inch square pan. Press the mixture until smooth and firm. Filling: Place the partridgeberries in a saucepan. Add the water; boil 5-10 min. until thickened. Add sugar and stir until sugar is dissolved. Cook for another 5 min. until thick. Remove from heat. Let cool. Spread the cool partridgeberry filling over the base. Spread the remaining dry mixture over the top of the filling. Bake at 350 degrees for 35-40 min. until golden brown.
Submitted by Judy Holloway of Glovertown, Bonavista Bay, NL

Place the rolled oats in a bowl; pour half the milk over the rolled oats. Let soak about 10 min. Add flour, sugar, baking powder, baking soda and salt. Add beaten egg and melted butter. Stir until blended. Fold in the partridgeberries. Bake in greased muffin pans at 400 degrees for 20 min.
Submitted by Anne Marie Melanson of Glovertown, Bonavista Bay, NL

Our October issue arrived today. My wife started on the recipe for blueberry muffins only to find out that through an apparent copy error,the quantity for baking powder was illegible.