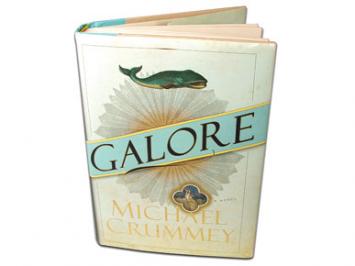 the release of Michael Crummey's latest novel, Galore, Downhome sat down with the renowned Newfoundland author for a chat. In the following interview clip, Crummey discusses how he came up with the title of the book and the interesting names for his characters, plus he reveals the book that served as inspiration for Galore.

In what has been touted as his most ambitious work to date, Michael Crummey's Galore, takes readers on a fantastical journey to a place where the line between fact and folklore has become blurred.

When a naked, pale, white-haired man with an opposing stench gets extracted from the belly of a whale beached along the shores of Paradise Deep, the strange occurrence sets off a series of flashbacks that tells the tale of two families - the Irish Catholic Devines and the English Protestant Sellers - and the love story that is woven through the fabric of each family's intricate history.

Galore is a whimsical tale of deceit, betrayal and forbidden romance; but ultimately, it tells how the stories and superstitions of the island mould each character, like the very blood that runs through their veins. This novel reads more like a Newfoundland soap opera than anything else you are likely to come across, but with a much more interesting storyline and well-developed characters ranging from fiends and ghosts to friends and foes. Readers will find themselves rushing through to reach the last pages, while wishing that this passionate, gripping and sometimes gory whale of a tale could go on forever.

I heard it on another computer. It was good to hear him talk about it again. I was able to hear him interviewed about it and read from it at Kingston Writers Fest here in Sept. I look forward to reading Galore. I have read River Thieves and Flesh and Blood short stores. Wonderful. F&B drew you in to each life in just the few pages.