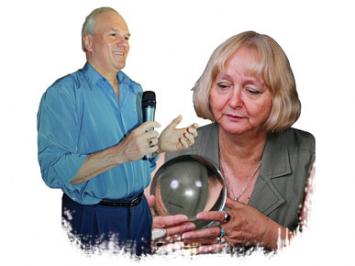 Hypnotist Gary Summers and psychic Edna Aker
In the October issue of Downhome, and with Halloween fast approaching, we seek out the individuals behind the mysterious world of the occult. Specifically, we take a closer look at psychic ability, hypnotism and illusion. Downhome tracked down three experts to get an inside look at these fascinating topics.

Here are a few excerpts from our interviews with Gary and Edna.


Edna Aker, a psychic living in Nova Scotia, explains the experience of tapping into her psychic ability.