Sailing on the Bodacious Bowdoin 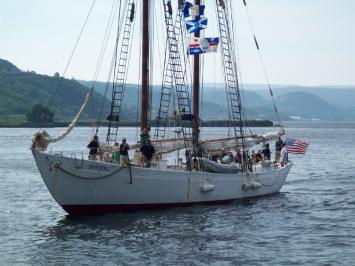 When floating history in the form of an 88-year-old Arctic schooner arrived in Corner Brook, residents took full advantage of public viewings and harbour sails offered at the conclusion of the Celebrating Bartlett 2009 Ports Program.

The historic vessel Bowdoin sailed into Corner Brook, its 12th and final port of call, on August 13, before returning to its home at Maine Maritime Academy (MMA) in Castine, Maine. It was my last chance to sail on the Bowdoin, so gratefully (but with some trepidation), I jumped at this rare opportunity.

At first glance, the little schooner didn't seem much larger than a few Gander River boats joined together. A stiff breeze made the many flags, collected from the various ports of call, prance from the schooner's mast - and also made me question my sea legs.

However, armed with a puncheon of Gravol and a hastily written will (neither of which was needed), I cautiously boarded America's only still-operating vessel designed specifically for Arctic exploration.

From the past to the future
Along with preserving the history of Bartlett's era, the Bowdoin also plays a role in moulding future sailors. Onboard for the last leg of the journey were 12 students from MMA who had joined the voyage at Norris Point for sail training. They swiftly reacted to the directions of Captain Eric Jergenson, the third and final captain to take the helm during the almost two-month voyage around the province, which officially began in Bartlett's hometown of Brigus.

Mingling with passengers, graciously answering questions, and much to the delight of children onboard, Captain Jergenson encouraged some to take a turn at the helm.

It also became apparent that seafaring is no longer a male-dominated profession. Several female students, first mate Hannah Gray and Captain Peg Brandon, MMA's Professor of Marine Transportation who was onboard to instruct students, quickly put paid to that notion.

Viewing Corner Brook from a marine perspective was a special treat, but it was the ship itself that was awe-inspiring. Retaining some of its original features, like the ice bucket on the foremast; the helm; and the compass (which is still used for instruction), the schooner oozed history. But what truly amazed me and provided a true appreciation for the hardiness of past and present crews, was the lack of a pilothouse to shield the crew from extreme weather. The only place to hide is below deck, which features a galley, sleeping accommodations for 16, and the ship's modern navigational aids - but there is no shower.

Propelled by a 190 hp diesel engine (the original engine could run on seal oil in a pinch) and assisted by two sails, the Bowdoin provided a leisurely and steady harbour cruise for enthralled passengers on a balmy summer's day in Western Newfoundland. But, like most onboard, I couldn't help wondering whether I could handle a prolonged journey in frigid waters under extreme weather conditions with the same nonchalance of brave Arctic explorers who had never heard of Gravol.

Although the word "bodacious" was probably not in the lexicon of either Bartlett or MacMillan, it is the one word that truly describes the bold, audacious, gutsy, and yes, even sexy, vessel Bowdoin. Here's to at least another 88 years of Arctic exploration and discovery. Long may your big jib draw!

Didn't get to sail on the Bowdoin while she was in Newfoundland and Labrador? Watch the videos, below, and get a taste of what you missed. (Videos by Gerald Ford)

For a newfoundlander, hope just came home from holidays in Corner Brook, it was great. noel lynch Curling