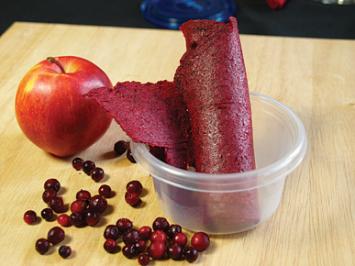 In the September issue of Downhome, Everyday Gourmet columnists Andrea Maunder and Mike Barsky show us how to make fruit leather, a fun, healthy alternative to "fruit roll ups" - just in time for back to school. Here are some of their tips on preparing this snack, plus some of their recommended flavour combinations.

• If you're using apples, peaches, mangoes, pears, bananas or other fruit that tends to discolour when cut, toss it in a little lemon juice as you're working.

• Bananas are nice in combination with other fruits, but won't work on their own.

• Citrus fruits don't work. But you can add a little of their juice or zest for flavour.

• Melons are also tricky because of moisture - best to be avoided.

• If you're using previously frozen fruit, it's best to drain off excess liquid.

• It's best to remove the skin of apples, peaches etc. for a smoother texture.
The texture of your purée should be similar to applesauce.

• You may choose to press the purée from berries that have lots of little seeds, such as raspberries and bakeapples, through a fine seive before drying.

• Flavour combinations are up to you - if it tastes good to you, dehydrate it!

• Sweeten to your taste. Liquids such as honey, corn syrup or maple syrup are easier to use than sugar since they blend in immediately. But you could use sugar and purée the mixture till no longer gritty.

• Bakeapple-Mango: Half-and-half. Or add pineapple and do a third of each.

• Strawberry-Peach: Half-and-half. A little lime zest is a nice addition.

• Spiced Apple is also really nice. Use maple syrup instead of honey and add a little cinnamon, cloves and nutmeg.

• Cranberry or Rhubarb: If you're going to try cranberry or rhubarb leather, you might want to cook the fruit to a thick jam consistency first, sweetening to taste, before dehydrating. Otherwise the texture won't be as nice.

For Mike and Andrea's recipe for fruit leather, see the September issue of Downhome.