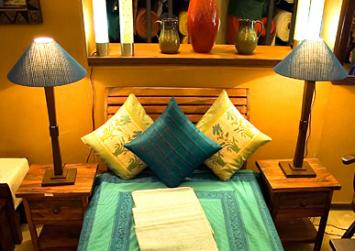 Working with a small space is not without its challenges. But you can find ways to create the illusion of space by reorganizing furniture and using as much space for storage as possible. Melanie Orr, one of the owners of Interiors Working for You, a professional home staging and redesign company in Halifax, Nova Scotia, says you must be detailed when decorating a smaller space. "Everything becomes a focal point. The eye travels quickly around a small room, so you want everything to have meaning and impact, or at least be tailored and make sense in the space," she says. Follow these tips to use your space to the fullest.

• Melanie says, "Built-in cupboards make a room feel more spacious than free-standing furniture. If there is dead space behind a wall, make use of it for open or covered storage." Jennifer McVeigh of Design by Jen, another Halifax interior designer, adds her own design tip: if you have a cubby or storage space under a staircase, "open it up. Put some shelves in and add some decorative pieces so it's a little bit more of an interest piece."

• "Round or oval rugs and tables provide more space than rectangular or square," says Melanie.

• "Light colours and glass tops lighten the visual weight of objects in the room," Melanie says. "The reflective quality of glass and mirrors bounce light around a room and make it seem larger."

• Use smaller proportions for accessories such as pillows, pictures and artwork. This easy tip will make a room feel more spacious.

• "Floating furniture will open up corners and wall space in a room, which adds the perception of space," says Melanie. Try to keep furniture away from the walls, to avoid drawing attention to the boundaries of the room.

• Melanie suggests using fewer pieces of furniture and keeping the pieces you do have at a regular size. "Too many small pieces will feel like you're living in a doll house. Large pieces will overpower the room. Choose a love seat with one or two chairs rather than couch and love seat for a more flexible arrangement," she says.

• Make a closet easy to access by removing doors. Paint the closet interior a contrasting colour. Use curtains to enclose the storage space.

• Track lighting takes up less ground space. When they're aimed at the wall, they create an unconstrained feeling. Replace floor lamps with wall sconces to create ambiance and save space.

• Place lighting in your closets. It won't seem so daunting to look in there and maintain your storage space.

• By cleaning your windows regularly, you allow more light to enter your living space. It's extraordinary how a quick wipe-down can make a room feel so much more airy and clean.

• If you are investing in new furniture, look for something that is multi-functional. For example, find an ottoman that doubles as storage, a coffee table with drawers, or a futon sofa that pulls out into bed.

• "With upholstered pieces, choose exposed legs rather than skirting to the floor for a more airy look," says Melanie.

• Keep colours and patterns simple. You don't want your small space to be overly distracting. Contrasting textures allow for an interesting, yet mellow space.

• Use your windows to your advantage. Make smaller windows appear bigger by adding a window treatment such as panelling or a nice fitted drape.

• Arrange the furniture so that wherever you are in the room, you have a view of the window.

• Use green plants or flowers near the window to enhance the effect of the window.

• Avoid dark colours and furnishings, which can make your space seem smaller. Keep the walls bright: a light blue or warm orange accentuates the light in the room and creates a spacious and unconstrained effect.

• Store and showcase your books in crates or baskets rather than taking up a whole wall with a bookshelf that juts into your living space.

• Use a plant dolly as a moveable bookshelf. It can also be used as a table.