Picnic Spots on the Avalon 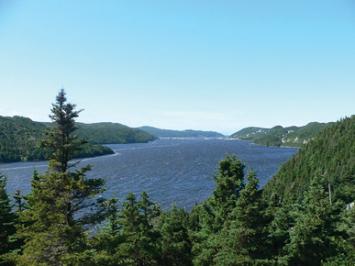 Picnic at Seven Island Lookout in Dunville, Newfoundland. Marjorie Browne photo.
The Avalon Peninsula sometimes gets a bad rap for being plagued with RDF (rain, drizzle, fog), but August is often the best month for weather in this region. We should all make the most of these sunny, warm days of the last real month of summer. And what better way to enjoy the afternoon than with a picnic? The Avalon has many inland, highland and seaside places to lay out a blanket and a delicious spread - too many to list them all here. Members of the Downhome staff have chosen a few favourites where they have had a snack or boil-up. Send us your suggestions and we'll share them with readers in a future issue.

Located on the outskirts of St. John's, Torbay is a beautiful town where rolling meadows meet steep cliffs to the sea. There are beautiful vistas from many angles, and hiking trails that lead to some of them. The Father Troy Trail, which connects to the neighbouring community of Flatrock, is part of the Avalon Peninsula's East Coast Trail system. From Gallow's Cove Road in Torbay, a short walk downhill on the Father Troy Trail leads to a meadow overlooking Gallow's Cove. Here there is the perfect picnic spot, backed by trees, where cows and horses often graze nearby. Lisa Codner photo.

With all the land preserved for the National Historic Site, you can have your pick of views for your al fresco lunch. From the side of Gibbet Hill, you can overlook the harbour and downtown St. John's; from the North Head Trail, in the shadow of Cabot Tower, you can watch for icebergs and whales in Freshwater Bay; from Ladies Lookout, take in the scene over Cuckold's Cove and Quidi Vidi. Any of these spots have grass or lichen-covered ground where you can spread your blanket and relax (but do watch for the fog rolling in; it can very quickly envelop the hill - and the safe path to the main road). Melissa Hampton photo.

Tors Cove
Park on the main road and hike down an old cart path, past a traditional-style home and out to the beach. Here you can plant yourself on the rocky shore and watch kayakers paddling in the lee of a small island offshore, scan the horizon for whale spouts or watch the birds diving for their lunch as you are enjoying yours. Or you can sit among the tall grasses in the meadow above the beach and pick wildflowers and berries that grow here and on the hillside. Dave Armstrong photo.

Cape St. Mary's
At the southwestern tip of the Avalon Peninsula is one of the most accessible seabird nesting sites in North America. The sky and the cliffs at Cape St. Mary's Bird Sanctuary are crowded by tens of thousands of northern gannets, black-legged kittiwakes, murres, razorbills and more. You can see them up close where they nest at Bird Rock, a 100-metre high sea stack. The path from the parking lot and interpretation centre to the cliffs crosses over a large meadow carpeted with soft mosses, swaying grasses and wildflowers. Lay back on the grass and watch the birds circle overhead, or use your binoculars to scan the waters for whales feeding and playing. It's like dinner and a show. Dean Ducas photo.

Dunville-Placentia
At Dunville, stop by the Seven Island Lookout along the main road for a scoff and feast your eyes on the beauty of the area. Drink in the view of the Sir Ambrose Shea lift bridge in Placentia and see if you can spot each of the seven islands in the picture-perfect Northeast Arm. A picnic area has been set up for visitors to take their time and savour the experience.

There's a small crescent-shaped strip of beach near Ocean Delight Cottages that would be ideal for a picnic spread or a boil-up. Wade in the cool seawater and search for seashells and interesting bits of driftwood on the landwash while basking in the sun and letting the saltwater breeze whet your appetite. Ocean Delight Cottages photo.

Anyone who's visited Northern Bay knows its secret - well, it's not so secret, really. The town is famous for the long stretch of fine, sandy beach at Northern Bay Sands. A privately owned park provides picnic and washroom facilities for day visitors, or you can set up lunch right on the beach. A freshwater brook running through the sand to the sea begs to be waded in, and the surf provides a refreshing dip. To the left of the beach, atop a rocky ledge, cool, clear water collects in a pool then spills over the edge and into the sea below. Sharon Hall photo.

Rotary Topsail Beach, Topsail
End your day with a campfire on Topsail Beach, watching the crimson sun dip slowly into the sea beyond Bell Island, Little Bell Island and Kelly's Island. Operated by the local Rotary chapter, the park also has picnic tables, a children's playground, restrooms/change rooms and a walking trail (in fact, it's linked to the East Coast Trail). You'll find the narrow road down to the beach from the main road in Topsail, Route 60. Teri Delaney photo.